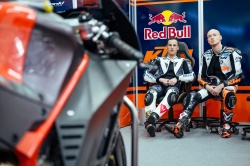 Now on the very cusp of their entry into the premiere class of MotoGP, the Red Bull KTM Factory Racing Team have been conducting private tests with test rider Mika Kallio and the support team at the Malaysian circuit of Sepang. The first official IRTA test for the 2017 season follows at the same venue this week when factory riders Bradley Smith and Pol Espargaro will be on the track with the KTM MotoGP machine to fine-tune ahead of the opening Grand Prix in Qatar on March 26.

The tests are the first for the team where all its material had to be air freighted in the middle of January from KTM Motorsports in Munderfing, Austria, to the Malaysian circuit. Sepang is a new track for the team and the new bike. Conditions have been in line with the typical local monsoon season – hot temperatures and humidity, and also periods of heavy rain.


Mike Leitner (Team Manager MotoGP):
“Since the tests in Valencia we had information that was in detail a bit different from what we previously had from Mika, so for the first time we tried to prepare for the Sepang test according to the questions that the factory riders put to us. The private tests here with Mika were quite positive and we were able to prepare better, but we will only see if this has been positive in the next three days. I believe that for us, the time between here and Doha is probably very important. We have prepared a lot of things – chassis, electronics, motors – and we now need to calmly try them out, so when we go to the Doha race weekend we take with us the best of what the company has put together for us. It’s clear that we are competing for the first year and we don’t yet have the basis of the other teams.”


Mika Kallio speaking about his impression of the private tests (Wednesday to Friday last week) said: "We were not too lucky with the weather. There was heavy rain and the grip level on the track was low. Even when the track started to dry out we saw that our lap time and the feeling with the tires was not at a good level, but this was a problem for everyone. It would have been good to see how it was with better conditions at this important test. We tried different things and this means we always had to push the bike to the limit to get the best lap times possible. Still I think we made some direction with the new frame. There were three, and the one I chose for my riding and my feeling was better than last year’s bike, so that was good. We also improved the lap times a bit. In general we had no big problems. The bike worked well. That was important, and I hope we could do some good things for the other bikes and find some good direction for the team.”


Ahead of the official IRTA tests, factory rider Bradley Smith spoke of his pre-season preparation and his fitness level after rehabilitation at the Red Bull Diagnostic & Training Center at Thalgau/Austria, and of his expectations for this week’s official tests.

Bradley Smith (Factory Rider MotoGP):
“I think we did a fantastic job with the fitness. We did six weeks during the winter and it was nice to get prepared. Also the team was based in Austria for three of those weeks, two weeks before Christmas and one week after. It was good also to be nearby and see their hard word on the new project, and to start to create team bonding. That’s an important thing when you start a new season, everyone working very well together. The knee is still not perfect and I am still working on the strength of the right leg compared to the left. We made some good progress but I’m interested to see how it is on the bike. To be in the gym and on the bicycle is one thing, but actually racing on the 260hp MotoGP bike around the racetrack is a bit different. I haven’t been on a motorcycle since the Jerez tests, so of course I’m going to feel a bit rusty. But I’m looking forward to starting the season and getting things moving. Most important for us is to put in the laps and gain as much information as possible. That’s my main target. I have no goals in terms of what to achieve except to improve, to learn each day, to evaluate and to make good steps in the right direction towards the best performance.”


Sebastian Risse (Technical Director MotoGP):
“We had two main focuses in the last week. To prepare material for the race team – that means checking things like the brake calipers and all the functions of the motors we will now hand over to the factory riders. Everything needs to work well when they get on the bikes tomorrow, so we just had the material for the two race bikes. On the other hand, we wanted to take another step in the development of the chassis. We had various ones here, and we tried to put information together to prepare a pre-selection for the riders, but in the end they are the ones that have to ride with the material. They have to know it goes in the right direction. But time is limited, and the conditions here have not been so good. Sometimes you have to make compromises and test the most important things so that you have an overview. We used our time to work with Mika, to establish what are the top priorities, the biggest potential, and what we want to try. To try the bike, and to get to know it and the team are the plan for the coming three days. The riders and our people have been on the winter break but now it’s the start, and we have to see how it goes. First we have to take a close look to see how the things we changed are working and we have to put in a lot of laps to get to a good level. Then we can make good decisions about further development.”


The next IRTA Test is at the Phillip Island circuit in Australia (February 15-17), followed by the official MotoGP Team Presentation at the new KTM Motorsports Building in Munderfing, Austria on February 20.