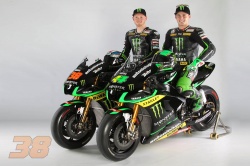 With the start of the MotoGP season imminent, the Monster Yamaha Tech 3 Team today unveiled its new livery for the forthcoming 2014 campaign, in Qatar.

British rider Bradley Smith and reigning Moto2 World Champion Pol Espargaro complete the exciting line up for the Monster Yamaha Tech 3 Team this year. They paraded the new livery of the 1000cc Yamaha YZR-M1 today, on the eve of the final pre-season test in Qatar. The familiar presence of the title sponsor Monster Energy graces the body of the bike once again, along with long standing partners Black & Decker Group with their brands DeWalt, Stanley, and also AntonioLupi, and Motul, who are all integral to the success of the team. But Monster Yamaha Tech 3 especially wishes to welcome the new partners in Sakura and Bihr.

The team has provided young and emerging talents, such as Ben Spies and Cal Crutchlow, with their breakthrough rookie rides in MotoGP. They have exclusively assisted them with learning and adapting to the MotoGP bikes. This year, the scheme continues with the signing of Pol Espargaro.

Having successfully completed two pre-season tests at Sepang already, both young MotoGP riders await the start of the year prepared, and with a keen sense of eagerness to begin.

With returnee Bradley Smith, and rookie Pol Espargaro, the team is confident of being able challenge for the top five when the season begins on the 23rd March under the floodlights at the Losail Circuit, Qatar.

Bradley Smith - #38:
“I am really excited to start the 2014 campaign, especially now that I have a year of experience. I am keen to ride the new 2014 package from Yamaha, and I am impressed with what I have sampled from them so far. I know we have very competitive material this year, so I want to do the best job I can. We are going into a new adventure with Pol, and I am excited to be working alongside him. I think it will be a good year for us both. We want to be the leading satellite team at every race, the same as the last couple of years. Cal and Andrea had some really strong performances; I want to continue this for the team, and I think this is a realistic goal for the season.”

Herve Poncharal – Team Owner - Monster Yamaha Tech 3:
“Everybody in the Monster Yamaha Tech3 Team is looking forward to 2014 with a lot of excitement. We have a young, strong rider line-up and I am confident the guys will deliver some fantastic racing this year. Bradley has matured and come of age during the last year, and now he is definitely riding with more confidence compared to his rookie season. It will be interesting to see if he may be able to fight consistently close with the top five. Pol on the other hand, is joining us after an incredibly strong year in the ultracompetitive Moto2 class. The results he showed during his first tests on our Yamaha demonstrated how quickly he could adapt to the MotoGP category. Of course, he still has a lot to learn, but we are confident to see him fight with the other satellite riders during his first MotoGP season. The Monster Yamaha Tech 3 Team is eagerly looking forward to the upcoming 18 races, also thanks to the incredible support that we receive from Yamaha. I want to congratulate Yamaha’s technical staff on the fantastic job they have done once again with the YZR-M1. Tech3 is honoured to continue its long term collaboration with Yamaha and we look forward to another successful season. I am also delighted that we continue our collaboration with Monster Energy, as well as with our valued partners Black & Decker Group, including their brands Stanley and DeWalt, and Motul. Moreover, I’m thrilled to welcome 2 new partners, Sakura and Bihr, to our Tech3 family and as a team, we can’t wait for the new season to start here in Qatar, in just a few more weeks.”