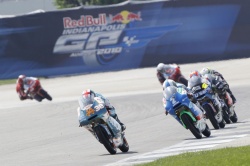 For a category so frequently associated with group races, the 125cc Indianapolis race was nothing of the sort. The target of 1'48 laps was also almost out of the agenda, as only Nico Terol and Marc Márquez were able to put a pair of these on the board. Márquez broke away early and was followed from afar by Terol, with a runaway win for the series leader on the cards. However, an eighth lap crash left the race to Terol, who took victory. Smith, Cortese and Espargaró looked for pódium places, with Cortese and Espargaró the eventual top three.

Bancaja Aspar rider Nico Terol was once again the winner in Indianapolis, despite losing seven tenths of a second to Márquez on the opening lap. The Spaniard gritted his teeth and waited on a mistake -one that came on lap eight and left him as leader. For fifteen laps he kept his cool on a hot Indianapolis track, taking his second win at the American circuit and moving back into contention for the 2010 125cc title.

Bradley Smith had less good fortune, starting from third on the grid. On the tenth lap he was up to second and looking to equal his best result of the year from Barcelona, but two laps later he received a shock. Falling at turn eleven, Smith's race ended just when it was looking like being a good day for the Briton.

Bradley Smith (DNF): "I tried to get a good start, but it wasn't possible and Marc and Nico got ahead. It was up to me to make up positions and, upon doing so, give everything that I had. I was pushing hard because I wanted to overtake the group in which I was riding and catch up with the frontrunners. There were a few corners in which the bike was sliding about a bit, but I didn't want to give up and looked to find my limit. I was enjoying what I like best, but unfortunately sometimes when you look for your limit you find and then pass it. It was a pity to have fallen, because I wanted a good result and the engine was running superbly. I didn't want to end my weekend like this, but at least I am convinced that I gave my all. Now I have to focus on next weekend's race in Misano, where I hope to give a better showing for my team."