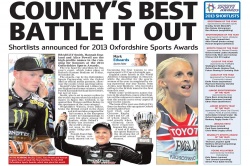 Bradley Smith, Hannah England and Alice Powell are the high-profile names in the running for honours at the 2013 Oxfordshire Sports Awards.

The trio head the shortlists for this year’s event, which takes place at Oxford’s Kassam Stadium on Friday, November 29.

The awards, run by the Oxfordshire Sports Partnership with the Oxford Mail as official media partners, showcase the county’s best sporting talent.

MotoGP rider Smith and 1,500m runner England are former winners, while Powell has made the final three before, but not yet won.

Smith, who is set to secure a place in the world’s top ten when his season climaxes in Spain this weekend, is up against Ben Watson and Ben Kelsey in the sportsman of the year category.

A total of 21 different sports feature in the 30-strong list of potential award winners.

Bradley is entered in the Sportsman of the Year Category (Sponsored by Brookes Sport)
along with Ben Kelsey (strongman), Ben Watson (weightlifting).