Points for Bradley after thrilling race 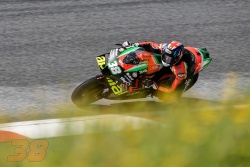 Bradley finished in the points in a race which was chaotic, to say the least. During the eighth lap on the Red Bull Ring, an incredible smash up brought out the red flag and forced a second start, for a second race, shortened to 20 laps. Starting from the tenth (Aleix) and fifteenth (Bradley) position on the grid, the two Aprilia riders concluded the Sunday race in the points, respectively in eleventh and fourteenth place.

Bradley had an outstanding second start, moving into the top ten. The English rider then managed tyre wear with a prudent finale, where he fended off the attacks of his adversaries to finish in the points.


Bradley Smith:
"I had two great starts and I am very pleased about that. The second race definitely went better, although towards the end I had to manage tyre wear and fuel a bit and that kept me from holding onto my advantage over Pirro and Márquez. In any case, overall it was a solid weekend, where we took some steps in the right direction, including during the race. It was a pity not to be able to use a new tyre for the second start like other riders did. I wanted to stay with the soft, but I didn’t have any others available. We need to keep working hard because in warm-up, the bike gave me the right feeling. It would be a step forward if we could manage to maintain that feeling in the afternoon with the higher temperatures too."