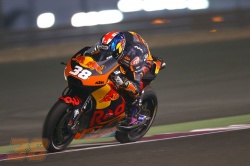 Following the tropical conditions at the Malaysian circuit of Sepang and the MotoGP IRTA tests at the scenic Australian circuit at Phillip Island, the team this week encountered the desert conditions in Qatar for the final official three-day test. The first day offered typical conditions for this circuit with air and track temperatures around 30 degrees Celsius, but riders had to deal with a strong wind and very difficult grip conditions with dust from the desert on the surface. As a result, Pol Espargaro had two harmless crashes after the first test day began at around 16:00 hours and short before finish at 22:00 that night.

Day two was overcast, and even a few raindrops tended to put the brakes on the program for riders and teams, and this resulted in Bradley Smith also having a small crash. All three riders we able to consistently improve their lap times on Sunday, the final test day, and also register their best lap times of the three-day session. In addition to testing various engine and chassis configurations, the team concentrated on the further development of various electronics strategies, and on setting up the bike for the first race. Espargaro also put in a successful complete race distance on the KTM RC16 at the end of the test.


Mike Leitner (Team Manager MotoGP):
"In general, the tests were good for us. Otherwise, it would have been difficult to come to this very special track with a new bike. Now we have to learn what we can improve. We had a full test program because there were many things we wanted to try before the start of the season. This doesn't always look good on the time sheets but it was very necessary for us to go through the process with all the riders, and we're quite happy. The riders and the team worked hard, and everyone gave the maximum, and that's the most important thing. We know we have to improve certain things on the bike but now let's start racing.”


Bradley Smith (Factory Rider MotoGP):
“We were just clarifying the parts and chassis that we’re going to race with, and I’m pleased with the improvements again today. I think we were able to improve another 2.5 seconds over the three days and the track conditions were a bit better today. I found my performance on the medium tire was better and I think that might be a race option for us. In general, we were working with the mapping and the electronics, and we made some good progress, especially in the electronics. We now have something that is a lot more consistent and good over the race distance with all tires, so everybody did a really good job. Looking at the lap times, we have to find another half a second. We’re close to the two guys in front but then there’s a gap to the next group, and that’s where we want to be if we want to fight for points.”


Sebastian Risse (Technical Director MotoGP):
"This was another new track for us, and one I think didn't suit us as well as the previous two (Sepang and Phillip Island). On the one hand, we had all the final preparations before the first race, and on the other, we just had to adapt to the track and the variable conditions here. We didn't have an easy time here, but there were still a lot of positives. We learned a lot. We could see clear progress so we can take some more steps and approach the first race weekend successfully.”


The Red Bull KTM Factory Racing Team and riders now return home, but all material and motorcycles remain in Qatar ready for the first race of the season, the night race on March 26. Brad Binder and Miguel Oliveira will also be competing on the new KTM Moto2 race bike in the middle category and Bo Bendsneyder and Niccolo Antonelli race in the Moto3 class for Red Bull Ajo KTM. Binder won the Moto3 world title on the KTM RC250 GP for Red Bull KTM Ajo last season, and Bendsneyder and Antonelli will be out to repeat that success.