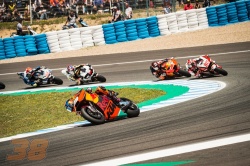 Almost 70,000 spectators cooked in early summer sunshine at the Circuito de Jerez – Angel Nieto for the fourth round of nineteen in the 2018 MotoGP contest. Track temperatures crept up to 45 degrees by the time of the 25 lap premier class race in the middle of the afternoon in southern Spain.

In a dramatic affair that was lined with incident and accident, Bradley Smith defied rear grip issues to battle to the final moments notching a 2018 highest finish of 13th. All three riders were within 21 seconds of race winner Marc Marquez.

Red Bull KTM Factory Racing will remain in Spain with two busy days of testing on Monday and Tuesday.


Bradley Smith (Factory Rider MotoGP):
“The opening half of the race was pretty good and then (Alvaro) Bautista and Maverick (Viñales) started to up their pace a little bit. I tried to go with them but got a bit nervous and stressed on the bike. I spent half the race digging-in-deep. Pol and I then duked until the last corner: I was off the track! To the white line and everything. I was going for the pass; whether it stuck or not was another matter. It was a bit of a shame to lose a place but I was pleased with my pace. It is nice to see our ’updated bike looking strong and Mika threw some good sectors at the end. It is looking like the right direction. Let’s see how this test goes and the team have some good ideas for progress.”


Mike Leitner (Team Manager MotoGP):
“Before we started the MotoGP race it was great to see an all-KTM podium in Moto3 and Miguel (Oliveira) did a great race in difficult conditions in Moto2. MotoGP was a bit crazy and we said to the riders before ‘please keep focused because it will be a long race and demanding on the tyres’. We saw some crashes and mistakes and the guys did great to keep concentration and make their best pace. It was good to see three bikes in the points and that Mika was ahead as he’s using a slightly different set-up on the bike, which is very positive for the future. The team did a great job to bring all the bikes home with points. Now we must look to the test, and to work on some items where we normally don't have any time in the (Grand Prix) sessions. There will be some long days but also necessary to make the next step. It is especially good to get so close to the leader on a difficult track like Jerez; we still need to work to make that gap smaller.”