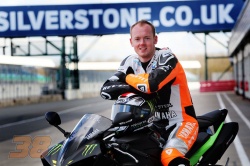 With Bradley’s debut grand prix fast approaching the media spotlight was on him at Silverstone last week with a full day of filming and interviews with BBC Sport and his local media.

Loyal supporter of Bradley, Oxford Mail, kindly gave us permission to publish these images of Bradley with the DeWalt R1 Yamaha which he used to lap the circuit for filming.

Thanks should also go to Kings Two Wheels Centre for preparing the bike and Silverstone for their assistance during a very cold day!  The main feature is due to be aired in the Jerez Grand Prix programme on BBC2.

Photos courtesy of ©Oxford Mail
You can visit the gallery here