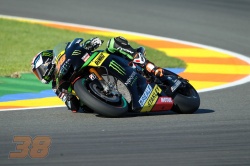 Bradley Smith fought determinedly to conclude the 30 lap sprint right behind his teammate at the Ricardo Tormo circuit today. The young Briton began the GP from the rear of the second row on the grid and bolted forward when the lights went out before quickly locking into his formidable race rhythm.

He then started his ascent, before brilliantly diving past Andrea Dovizioso, his championship rival, on lap 26. The fight continued and Smith carried on his pace as he diced right until the chequered flag but finished ahead and sealed 6th as well as the leading satellite rider position in the World Championship standings.

Bradley Smith: – Position: 6th – Championship: 6th – Points: 181
"It has been a fantastic season and almost perfect after completing all of the 18 rounds, even though I’m a bit disappointed to miss out on our target of finishing as the leading satellite rider today. However, I can’t be hard on myself as I ended up in the top six and I collected a total of 181 points over the year. I am very proud of this, but I am especially pleased with my performance in the second half of the season. In all honesty, after the summer break I think I made another step forward with my qualifying as well as some of my race performances. Anyway, this track wasn’t easy for me and we struggled a bit all weekend, but to be there fighting in the second group was satisfying. We have to look back on all of the ups and downs of the year and then improve on the negatives because we have to do a better job next season. In this sport, you can’t just stay at the same level, so we need to see how we can make another step forward. 2016 will be a new challenge and experience, but I’m already very excited to begin on Tuesday at the test. I’m also looking forward to a bit of a rest as it’s been a demanding year with all of the work that we’ve been doing for MotoGP, plus the Suzuka 8 Hours as well. I want to give a big thanks to all of the team who did a fantastic job. Although I didn’t make any mistakes, they didn’t either with their jobs and to make a Yamaha YZR-M1 work for 18 races without any issues, highlights the great job they have done. I am proud of everyone at Tech3 and thank you to all. In addition, I also want to say thanks to Bridgestone for all of their support and it has been fantastic for me to work with them for the past three years. They have done a tremendous job and for every season that I have been in MotoGP, they have upped their performance continuously, especially this year. It would have been easy to just roll out and enjoy the season, but they came with even better material and they’ve set the level very high in MotoGP.

Hervé Poncharal - Team Manager:
“What an incredible day to close an amazing year of racing in MotoGP. It was really intense all race long whilst we were watching our two guys, who both did an excellent job. Yet, I also cannot hide the fact that we were checking out what was happening at the front so I must give big congratulations to Yamaha again as well as Jorge. Regarding our guys, it was a strong weekend overall and a positive finish for both of them. The start was average but they never gave up and pushed all the way until the chequered flag. In addition, it was quite interesting to see them fighting with the Suzuki and Ducati riders. Ducati have an incredible engine whilst Suzuki have a good chassis, but out of all the three, I think we had the strongest and most efficient package. It’s super to have our two guys in the top six at the last round, plus Pol moved up one place in the championship after taking one point out of Petrucci. Furthermore, his result helped us to secure 4th in the team standings. On the other side of the garage, Bradley did really well today as he has done all year, so I must congratulate him. He is the only rider other than Valentino who has scored points at every event in 2015 with his worst result being 8th, which highlights the fantastic job that he has done. I’m really pleased to see Pol end on a positive note as it was very important for him to get a strong finish to the season. This will help us to go to the test on Tuesday with an even more positive frame of mind and overall, we are a happy team so we will celebrate tonight.”