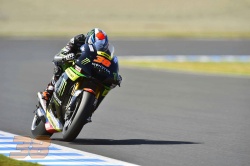 Monster Yamaha Tech3 Team rider Bradley Smith concluded the Motul Grand Prix of Motegi in 7th position after producing a determined display in what was a demanding race at the Twin Ring Motegi circuit today. The 15th round of the MotoGP World Championship kicked off in tricky conditions as rain and mist hit the track in the morning, which caused all of the warm up sessions to be delayed. Yet, the MotoGP race was unaffected and began at the scheduled time and when the lights flicked off, Smith launched forwards to commence his Motegi battle.

He completed the opening lap holding his grid position and then targeted the pack in front as he looked to join the hunt for the top six. However, during the next lap, Smith slipped back to 12th but he dug deep and set into his race pace before shifting through the field to 8th by lap ten. Next in his sights was Cal Crutchlow who was holding the leading satellite position and Smith pushed on to consistently inch closer. The Briton homed right in and on the 15th lap, he bolted past Crutchlow to clinch 6th before opening up a gap to the chasing rider. The 24 year old carried on battling but on the last lap he was shuffled back to 7th despite giving his all as he fought all the way to the chequered flag. Nevertheless, today’s placement confirms Smith as one of only two riders who have finished every MotoGP race this season and he now optimistically looks onwards to the next round in Australia, where he gained his maiden podium in the premium class last year.

Bradley Smith: – Position: 7th – Championship:6th – Points: 152
“I am pleased with today’s result after the difficult start that we had in warm up this morning as we finally managed to turn it around and perform well even in the wet conditions. When the morning session began, we ran with the base setting that we used at Silverstone, which I wasn’t overly happy with but it was the only wet setting that we had. To be honest, it didn’t work and we were down the order so I expected the race to be even more difficult. I crossed my fingers for dry weather as I knew that if that occurred, I could attack and do a good job, yet it wasn’t to be. However, the team adjusted the bike and shortened the wheelbase in order to find some more grip for me and it worked really well. At the beginning of the race, I needed to get used to the new setting and adjust myself, but the feeling came quickly and then I started working my way through the field. It was a shame that Crutchlow passed me on the final lap but my front tyre was really worn and I think that the Honda had a little bit more towards the end. Also, I was a little bit lucky because I was leading Cal until turn 11 and there I tucked the front but saved it with my elbow, so as a result he powered past me. Anyway, I am not too disappointed because I was in the leading satellite battle and we really improved a lot from the warm up. I may have lost 5th in the championship but it was to the rider who won the race, so I can’t be too upset. Next up is Phillip Island, which I am looking forward to. Last year I had a good feeling there and the Yamaha is known for running well at that track. Therefore, bearing in mind all of the improvements that we have made to the bike, the feeling and my riding style, it should be a good weekend. I can’t promise a repeat of last year’s podium but I’ll try my very best!”

Hervé Poncharal - Team Manager:
“It was a typical Japanese Grand Prix and like always, a lot happened. The race was very eventful as well as exciting for everyone to watch including us on the pit wall! Initially, we had been a little bit worried about the race as Brad was not comfortable in the wet weather conditions this morning so we were not too optimistic. However, the team changed the entire setup of the bike and although his start was quite good, the first few laps were quite slow but he managed to recover very well and continued pushing every lap. He climbed all the way up to 6th but then the tyres started to have a big impact and it became the key difference as we saw at the front of the field. Nevertheless, I want to congratulate him as he fought right until the end and his result keeps Dovizioso behind him in the championship. In addition, it was a really valuable weekend for him as he increased his confidence in the wet. On the other side of the pit box, Pol was having a good race in the opening stages and his rhythm was similar to Brad’s. Yet, unfortunately he made a few mistakes which meant it was a bit up and down for him and the worst thing was that he crashed right at the end. This was a big shame as he needed a confidence boosting result in the wet, but anyway there is another race next week and hopefully the sun will be shining there for both of our Monster Yamaha Tech3 riders.”