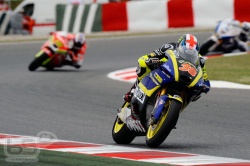 Starting from 13th place on the grid, the British rider spent the entire 23-lap race battling inside the top 15 in cloudy but warm conditions.A brilliant overtake on Alex de Angelis on lap 21 ensured Smith secured 12th position and he has now scored points in each of the opening five races of the season to remain inside the top 10 in the overall World Championship rankings.

Bradley Smith 12th – 27 points:
“Looking at the positives I have finished inside the points again and kept my place inside the top 10 in the Championship. But the gap to the front is still too big and we have to keep working hard to reduce that in the future races. I had a quite good start and put myself in a position to fight for the top 10 but the bike was nervous in the braking area at the beginning of the race and at the end I was not able to do the lap time of the group led by Corsi. I'm quite disappointed about that because I expected to fight for sixth place. We learned a lot once again and we will try and improve our situation to be more competitive at Silverstone, which is obviously a huge weekend for me being my home race.”

Herve Poncharal – Team Manager:
“We expected a little bit more from today's race but at least Bradley finished and we gained some more crucial information on the Mistral 610 machine. Bradley was in the points again and he never gave up, but clearly his potential is higher and we need to work together to try and be closer to the front.”