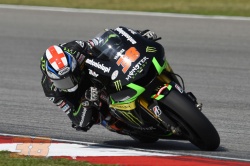 Monster Yamaha Tech3 team rider Bradley Smith will launch from the rear of the third row on the grid for the 20 lap challenge at the Sepang International Circuit tomorrow. The British rider began the day by undertaking 19 laps in this morning's free practice 3 session as he relentlessly continued his work with the Monster Yamaha Tech3 team in order to confidently set himself up for the all-important qualifying practice 2.

He concluded the session in 8th with a time of 2’01.426, which was only half a second from his target of 5th position. When the 15 minute QP2 dash began, the British rider lunged immediately in the tropical heat in Malaysia and ran at full pace before concluding the session with a top lap of 2’01.263. His performance today will see him rocket from 9th position on the grid as he fully intends to follow up his debut podium from the previous round in Australia, with another top result at the 5543 metre circuit in Malaysia to strengthen his aim of clinching 6th in the championship standings.

Bradley Smith: – Position: 9th – Time: 2'01.263
"Overall, I am pleased with the work that we were able to undertake today as I believe that we extracted the most that we could from the bike. We successfully managed to overcome some of the issues which I experienced yesterday and now we will analyse the data in order to establish where I can make further improvements. It appears as though sector three is a key area which I need to focus on in order to have a strong performance. I feel confident for tomorrow, but we must remain realistic with our expectations in the fight against our rivals in the championship. It will be vital to have a good start plus I need to be consistent for the entire 20 laps with the race being a long one and the humidity making it even more challenging. However, I feel ready and am quite excited for the demanding battle where I aim to score some more valuable championship points."