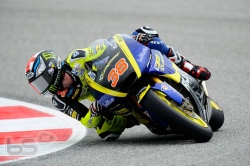 Only four of the scheduled 26-laps had been completed when the red flags came out to halt proceedings after oil was dropped on the track approaching the final corner.

The race was restarted over a shortened 14-lap distance and British rider Smith was immediately locked in a typically clo se and exciting battle inside the top 10.

A sun drenched crowd were treated to an enthralling battle between eight riders for fourth place and 21-year-old Smith secured his ninth top 10 finish of the season with a brilliant late charge.

He started the penultimate lap in 10th but superbly steered his Mistral 610 machine by Thomas Luthi and Johann Zarco to move into eighth. Smith then put compatriot Scott Redding under intense pressure but was unable to find a way into seventh despite a determined last lap attack.

Smith took the chequered flag just 1.8s behind fourth position and he is confident that with more laps he could have fought his way comfortably inside the top six.

Bradley Smith 7th – 85 points:
“It was a good race and I'm just a little bit disappointed that we only had 14 laps because normally I'm really strong and recover some positions during the last part of the race. Had the race been longer I am convinced I could have been in the top six because I felt a few guys would not be able to keep that pace. It was a tricky race and it felt like 14 qualifying laps but the encouraging thing is I was very close to fourth and I managed to beat Luthi and Zarco. We are still lacking in a few areas but we made a good step forward and I'm excited to go to Aragon because we have a direction we want to try with the Mistral 610.”

Herve Poncharal – Team Manager:
“The weather played a big part this weekend but I think Bradley, Xavier and the Tech 3 Racing Team coped brilliantly in tough circumstances to give us a good opportunity to have both of them in the points. It is hard mentally when the race is stopped and restarted because you have to psyche yourself up again but Bradley was doing a really good job. Bradley was involved in a really strong fight in the group that was battling for fourth position and as always he gave his maximum effort. He achieved another very strong result and I am happy with his performance.”