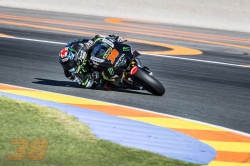 Bradley Smith will contest his final Grand Prix for the Monster Yamaha Tech3 Team from the head of the fourth row of the grid after a hard fought display today at the Circuit Ricardo Tormo. His solid work yesterday paid off as he completed the ultra-competitive FP3 session in 10th and just 0.257 from his teammate after he posted his time on the 19th lap out of 21. This allowed him to pass straight through to Q2 and here he set off at speed in pursuit of clinching a strong grid placement for the Valencia GP. Smith’s efforts saw him qualify in 10th as he finished just over half a second back from the second row and tomorrow afternoon, he intends to close what has been a challenging year on a high note.

Bradley Smith: – Position: 10th – Time: 1'30.949 – Laps: 9
"First of all, it was a great achievement to go straight through to Q2 today, as it has been a few GP’s since I’ve been able to do this. This afternoon, we worked quite hard on the race setup in FP4 and we also learnt a few more things during the qualifying. I am still not 100% happy with how the bike handles, but we confirmed our race tyres which is positive and now we just need to make some small modifications for the 30 lap sprint. It will be a long, tough fight and of course, it is vital for the bike to handle well under braking because here it’s important to have that balance, especially in the hard braking areas, of which there is at least one in each sector. I’m on the outside of the grid tomorrow, and that is possibly a bit better than beginning from 9th because sometimes you can get pinched on the inside at the first turn. Nevertheless, I will try to get a good start and then enjoy my final event with the Tech3 team."