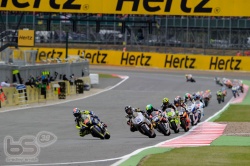 Tech 3 Racing Team rider Bradley Smith rode a determined race in front of a large home crowd at Silverstone today to collect his best result of the 2012 Moto2 World Championship with a hard fought seventh place finish in an exciting British Grand Prix.

The 21-year-old made a scintillating start from the second row of the grid to seize the lead going into the first corner and he was then locked in a pulsating battle for the lead with compatriot Scott Redding.

With plenty of home pride at stake, the pair exchanged the lead several times in a tussle that enthralled the home crowd of over 66,000 fans before Redding took control at the front of the pack.

Smith maintained his inspired early challenge and kept himself firmly in contention for a second successive Moto2 podium at the long and technically demanding Silverstone track for the opening half of the 18-lap encounter.

Battling hard to keep his Mistral 610 machine in contention for a first top six finish of the season, Smith fought out a terrific battle with Italian Claudio Corti in the final laps.

Despite his best efforts to hold onto sixth place, Smith was unable to keep the hard charging Corti at bay and he dropped back to seventh place on the final lap. Smith's highest finish of 2012 moved him into eighth in the World Championship standings on 37-points.

Bradley Smith 7th – 37 points:
“I expected to battle for sixth place and that's exactly how it turned out. I'm just happy that I got to lead the British Grand Prix, even if it was only a brief experience. It was a shame that Corti passed me on the last lap because it would have been nice to finish off a positive weekend in the top six. But to qualify fourth, lead the race and then be inside the top six for the most of the race shows we have made a big step with the Mistral 610 machine this weekend. We can make it better but this result gives us some confidence for the future and credit to the Tech 3 Racing Team because they are working non-stop to improve the bike and help us get closer to the podium battle. The support of the British fans was incredible again and I hope they enjoyed the early battle with Scott. We now need to make sure I am up there competing for the lead in a few more races."

Herve Poncharal – Team Manager:
"I am very happy with the performance of the Tech 3 Racing Team today. Bradley showed incredible determination all through the weekend and he got a good qualifying result that helped him challenge at the front where he belongs in the race. We know he can be very aggressive at the start and he certainly didn't let us down today. It was a great moment for him to be leading his home race and he fought very hard for the whole race. He was pushing right until the end and it was a pity that he could't quite hold on for his first top six of the season because he definitely deserved it. Seventh is still by far his best result of the season and shows the potential of the Mistral 610 we always knew was there. We just need to make sure we are competitive on every track now in the future."