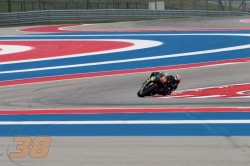 Bradley Smith will start round 2 of the MotoGP World Championship one place behind his teammate in 10th. The 23 year old began his day with a bright sprint to 5th position in FP3 with a top time of 2’03.666 which was a mere two hundredths of a second back from 3rd place.

This left the British star confident of a successful Q2 campaign, yet unfortunately he experienced a technical issue on his MotoGP bike at the start of the session which forced him to make a pit stop and then change to his second Yamaha which was equipped with a used front tyre. Despite this, Smith pushed onwards before finishing with a best lap of 2’03.440. Tomorrow he will attempt to replicate his performance of last year at the Circuit Of The Americas, where he finished in 5th and as the leading Yamaha.

Bradley Smith: Position: 10th - Time: 2'03.440 - Laps: 6
"It goes without saying that I’m disappointed to finish today in 10th. We had some technical troubles during FP4 and we couldn't fix them in time for QP 2. Unfortunately, this meant that I had to stop to change the bike, which is far from ideal in a 15 minute session on such a long circuit. Furthermore, we didn’t have time to swap the front tyre on the second bike, so I did my laps with a used one. It was a session where nothing went our way, so it’s disappointing to start from the fourth row. However, we have had the pace all weekend and I remain upbeat as our race pace is consistent, so now we just need to adjust the bike a little in warm up and then we will be ready. The race is a long one here but I feel comfortable with the bike plus I am confident of making some good overtakes at the beginning so I am still optimistic that we can have a competitive race tomorrow."