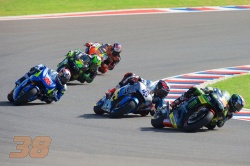 Monster Yamaha Tech3 Team rider Bradley Smith continued his strong form in the 2015 season by expertly speeding to 6th position at round 3 of the MotoGP World Championship in Argentina. The young British rider kicked off his race from 10th position on the grid with the sun beaming down on the track and leapt forward as the lights went out to hold his qualifying position at the close of the first lap.

He then ran a series of competitive laps as he sought to glide through the field and storm to a top result. With 15 laps until the end, Smith dived inside Aleix Espargaro to snatch 7th and his determination remained strong as he opened a gap on the pursuing rider. The young Briton carefully maintained his tyres before smoothly continuing his strong pace, greeting the finish flag in 6th position. His solid performance in Argentina confirmed his second consecutive sixth place finish this season and fills him with confidence for the forthcoming European rounds.

Bradley Smith: – Position: 6th – Championship: 7th – Points: 28
"Today I'm really happy about taking home this 6th position as this is actually better than we expected during some points of the weekend. Before the race, I was still undecided about which compound of rear tyre to use as the tyre life is vital at this track due to the grip issues we have had all week. We made a few changes inbetween the warm up and the race including the decision to go for the hard compound. It was a shame that the first corner didn’t go to plan, like it did last week and I wasn’t able to go around the outside and make up some places. A few guys got in underneath me who were riding on the racing line, whilst I was on the dirty section of the track. Afterwards, when you lose three or four seconds because of a tricky start like this, it’s impossible to get back with the leading bikes as the lap times are so similar. However, I will gladly take this result as it confirms my third consistent race finish in the top eight, which is a far better start to the season compared to last year. So now I am looking forward to Jerez with confidence as I can't wait to return to race in Europe in two weeks time."

Hervé Poncharal - Team Manager:
"It was such an exciting race and I am so happy to see Yamaha win it with an incredible Valentino on board! Last night there were some long faces in the Yamaha camp and they were a bit sceptical about what they could accomplish in the race. Yet, everyone at Yamaha worked really hard and focused more on the race pace rather than the qualifying. The choice of the extra hard tyre was definitely the best decision for all the Yamahas as we could clearly see how much Valentino recovered at the end of the race. Our boys did a really good job and we are very pleased with what they achieved here today. Bradley had another really strong showing and after undertaking a good start he then set about making up all of the places that he could. He was lapping very similar times to Jorge all race and ended up in 6th, which is another great result so I am very satisfied. On the other hand, what a performance from Pol! He was 18th on the grid but finished 8th at the flag and it was an incredible recovery. Both of our riders scored strong points here in the race, which is always important for the Championship and now we will head back to Europe knowing that it was mission accomplished."