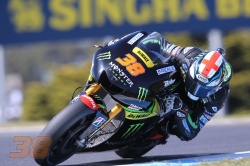 Bradley Smith pushed throughout the 27 lap sprint and eventually concluded the 16th round of the 2015 MotoGP World Championship in 10th position. The young British rider launched into action from the fourth row of the grid and finished the opening lap in 12th as he set into his rhythm whilst he intended to move through the pack. After running at a consistent pace, the 24 year old moved up one position on the fourth lap and then continued to build up his speed before overtaking Andrea Dovizioso on the 10th. He slipped behind the Ducati rider one lap later, but he forced his way through shortly after and then stretched ahead. Next in line for Smith was Aleix Espargaro in 9th and the Briton pushed onwards as the distance to the end of the race decreased. Yet in the end, Smith ran out of time and finished in 10th, just over half of a second behind the Suzuki factory rider.

This result sees Smith continue his 100% record of completing every MotoGP race of 2015 inside the top ten as well as increasing his advantage over Dovizioso in the World Championship standings with only two races left to run. The 24 year old will now seek to guide his Yamaha into a top six position at the next race at the world famous Sepang International Circuit in Malaysia.

Bradley Smith: – Position: 10th – Championship: 6th – Points: 158
“To be honest, today was a tough race for me and it’s positive to walk away with a top ten finish. This weekend we struggled to find the right setting in order to give me the confidence that I needed to be fast around this technical track. In the end, we did the best that we could with a solid setup for the race and ultimately, I was pleased with the consistency of my lap times. They were better than the times I had been setting across all three days so the team did a good job with giving me the best bike that they could. Having said that, unfortunately this was only good enough for 10th, but nevertheless, I was fighting with my teammate and I finished in front of my championship rival Andrea Dovizioso, plus I gained three points on him. We must learn from this tricky weekend because every day we couldn’t quite find the right direction, especially with regards to the extra hard tyre that Bridgestone brought here. Therefore, we need to take note of what we did and then try to improve these factors in the future. However, next up is Sepang and we won’t have that tyre there so I will arrive in Malaysia a lot more confident about getting back inside the top six which is where I feel I need to be. We had two great tests there in the winter, so I’m happy that we’ll have a solid base setting to start with. It will be another gruelling race under the heat so now it’s time to recover as much as possible in the next few days so that we can be ready for a good performance in Sepang.”

Hervé Poncharal - Team Manager:
“Before I talk about the Monster Yamaha Tech3 Team, I would like to say that this race was incredible and I am sure that the people behind their television screens and all of the spectators around the track enjoyed this superb Grand Prix. We truly have a brilliant show in MotoGP at the moment! Regarding our guys, there’s not a huge amount to say, but we have to be pleased with their performances. Both Pol and Brad rode strong rhythms and had steady yet solid races. I am glad that Pol managed to recover a few positions and pass his brother, plus this was the third time that he finished ahead of his teammate. So I believe, he has to be positive about this because we all know that he has been through some difficult moments recently. Anyway, it’s great to see him back on track and I really hope that we will see him continue this trend in the last few GP’s. As for Bradley, qualifying was tricky but he recovered well in the race and had a good pace. It was not easy for him to get rid of Dovizioso but he did and finished inside the top ten. In addition, he also took a few more points out of Andrea in the championship, which is positive and he gave it absolutely everything. I want thank him for trying really hard all weekend especially after that nasty crash in FP4. Now, we can relax for a bit in order to be prepared for the challenge at Sepang, the final of the three fly away races.”