Smith delighted with his performance 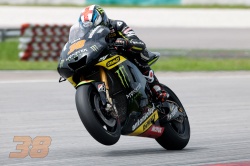 Rookie Bradley Smith was delighted with his performance today after he quickly restored his confidence following a tumble yesterday at Turn 7.

The 22-year-old concentrated mainly on improving his braking technique today on his way to clocking a best time of 2.02.369, which was an impressive 1.6s faster than his best pace on the opening day. Smith was able to get 63 valuable laps under his belt on a day in which he also began to evaluate a range of different settings on the Monster Yamaha Tech 3 YZR-M1 machine for the first time.His best time put him 10th and encouragingly for the future he was only marginally over one second away from the top six.

Bradley Smith 1 0th 2.02.023 – 63 laps:
“After the crash yesterday I am feeling much happier today, though I'm a little bit wary of some things that happen with the front and that can play on your mind a little bit. But the track has more grip and my feeling with the bike is much better. Today I worked a lot on my braking technique because I'm being too cautious at the moment and not using the carbon brakes as they need to be used. We played around with some different settings today too just to gain more of an understanding about what direction we can take in the future if we have certain problems. I think Jorge is doing exceptionally well riding around consistently in the 2.00 bracket because all of the other guys seem to be in the 2.01s. He is on another level at the moment but to be honest I feel quite good doing consistent 2.02s. We are working for Qatar and the first race rather than lap times now. It is not e asy that's for sure but I am confident soon it will start clicking into place and we will start rolling forward.”