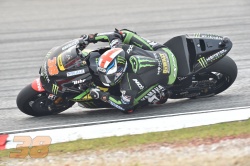 Monster Yamaha Tech3 Team rider Bradley Smith conquered the Malaysian Motorcycle Grand prix with a superbly calculated run to 4th position in today’s round 17 battle. The 24 year old got straight to work as soon as the race kicked into gear in the searing heat at Sepang as he leapt forward from the third row of the grid. The Briton muscled his way around the 5.5 kilometre circuit on the opening lap which he finished in 10th and he remained confident of ascending through the field. By lap 4, Smith had already passed three riders and found himself in 7th position. His pace continued to increase and just before the midpoint of the race, the Briton was in 6th and homing in on Andrea Dovizioso and Cal Crutchlow.

He chipped away and brilliantly shot past Crutchlow on the 11th lap, clinching 4th as well as the lead of the satellite bike battle. Smith then pulled clear of the pursuing rider and stretched out in front. He comfortably carried on his rhythm before finishing the GP in this position, after having opened up a gap of 4.726 seconds over Crutchlow by the time the chequered flag fell. The strong result marks a positive close in the challenging conditions for the young British rider and sees his points tally rise to 171 in the MotoGP standings where he currently sits in 6th, with one round left to race in the 2015 World Championship.

Bradley Smith: – Position: 4th – Championship: 6th – Points: 171
“Obviously, finishing this race in 4th position is a fantastic result, especially after such a challenging weekend. Going from 14th at the end of day one to 4th today highlights the great effort by the team and I must thank them for this. In all honesty, we really struggled in the last few days, but we just kept on trying to improve step by step. Things eventually looked good in warm up and I was able to follow a few riders, plus we made another positive change on our Yamaha for the race. Therefore I felt confident, because I knew that I had a good rhythm and I would be able to remain consistent in my lap times. In addition, I know how to ride with old tyres here. When the lights finally went out, I got a good start, but then I lost a bit of time in the second corner. However, I was able to pass Stefan Bradl quite quickly and then I tried to keep the gap to Cal and Dovizioso the same because I believed that at one point in the race, I could close in on them. Therefore, I also tried to look after my tyres the best that I could. It was unfortunate for Dovizioso because he had that incident with Cal, which is a shame because it would have been good to fight with him. Yet, after that, I was able to catch Cal and then I pushed as hard as possible in the last 7 laps to open up a gap. It is amazing to get 13 points as we have now extended the points lead over Dovizioso for 6th position in the championship. So we definitely have something to celebrate and we can go home with a smile on our faces after a positive three weeks.”

Hervé Poncharal - Team Manager:
“I am very happy and proud of both of our guys and what a great way to end the weekend in Malaysia. Bradley had an amazing race and brilliantly overcame the tricky weekend that he was experiencing. It was clear to see that he had been struggling every day and the fact that he went through QP1 highlighted the fact that we were far from where we were supposed to be. Fortunately Brad had a much better feeling in the warm up and when the race began, he had a good start as usual. We knew that physically he was really fit, plus able to cope with the heat and this is exactly what he did as he posted consistent times lap after lap which meant that he moved through the field. He had a fight with Cal, who made a slight mistake which allowed Bradley to open a gap and then he stretched ahead and even closed in on Valentino a little bit. So overall, we are more than happy with his 4th place. I would also like to commend Pol and thank him for trying as hard as he did. We knew that he had a crash in this morning’s warm up due to colliding with Barberá. This caused him to injure his vertebrae and it was touch and go as to whether he would be fit for the race. Yet, once he got going, he pushed as hard as he could and in the end he got some good championship points. All in all, the outcome of the third flyaway round was very positive, so hopefully we can repeat a similar performance in Valencia.”