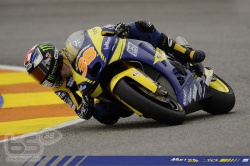 The 27-lap race started with light rain falling over the Ricardo Tormo Circuit, though the race was declared dry and Smith started on slick tyres.

The tricky conditions provided a serious test of skill and concentration as Smith quickly tried to gauge grip levels in the early phase of the race.

The season ending GP Generali de la Comunitat Valenciana finished in disappointing fashion for British rider Smith. He immediately thrust himself into contention for the podium with a lightning start that moved him from 12th on the grid into fifth at the end of the first lap.

Pushing hard to try and find a way by Finnish rider Mika Kallio, he crashed out at the second corner on lap two. He landed hard on the left collarbone he broke 17 days ago after a practice crash in Sepang, but fortunately suffered no additional damage and he remounted to finish 23rd.

Bradley Smith
"I am really disappointed with the crash because I had a very good first lap. I was aggressive and I had a very good feeling with the bike, even though the conditions were far from ideal. I passed Kallio going into the first corner and was looking to push on when he was quite aggressive at Turn 2. I had a big slide from the front and rear tyres and it was impossible to save it. Today pretty much summed up my luck in the final part of the season and I seem to have been followed by bad luck for a few weeks now. It is a shame that we couldn't finish the season with some stronger results but we have proved capable of fighting for the top five on a regular basis. Luckily it was quite a slow crash at that part of the track and my shoulder didn't suffer any damage. I'll be testing the new 2012 Mistral 610 machine tomorrow and I'm looking forward to that. We're confident we have made big improvements with the new bike that will help me fight at the front consistently next season.”

Hervé Poncharal – Team Manager:
"That was a very hard race for everybody with the conditions being very difficult. At times it was like riding on ice because this track is quite slippery anyway, and the rain made it even harder to understand grip levels. Unfortunately Bradley was ruled out very early when he crashed and that is not how we wanted to end the season. It is disappointing because he immediately found a good pace in the difficult conditions and we probably would have been in the battle for the podium. A few mistakes recently have cost us a lot of points but this has been a learning year for Bradley and there are still a lot of positives to take from it, including some fantastic performances like in Silverstone. Next year he will be stronger and more experienced so we can look forward to 2012 with a lot of optimism. Now we have to focus on preparing for next year when we test the new Mistral 610 tomorrow. The whole Team is excited to check the potential of the new bike. I would also like to congratulate everybody associated with the Gresini Racing Team for their emotional win today. They have shown incredible dignity in dealing with the tragic loss of Marco Simoncelli, and I am sure he would be very proud of their success today.”