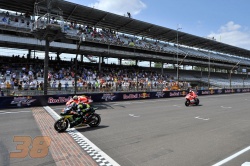 Smith got a stunning launch off the line and on the first lap he held fourth place before he slipped back into a fight with Andrea Dovizioso and Nicky Hayden for eighth.

The 22-year-old exerted constant pressure on his more experienced counterparts and his determination and hard work was rewarded when Hayden and Dovizioso ran off track at the final corner.

Smith pounced on the opportunity to win a drag race to the finish line and he claimed a hard fought eighth spot by the narrowest of margins over home crowd favourite Hayden. Smith’s excellent performance also elevated him into the top 10 in the World Championship standings for the first time in his rookie campaign.

Bradley Smith 8th – 59 points:
“I think eighth position was more or less what we had predicted for the race, but we did not expect to be so far behind the winner. The race was very exciting and I got an amazing start but pretty much right from the first lap I felt we had an issue with the rear end of the bike. I tried to maintain my pace but unfortunately I ran off in at Turn 6 and a few guys passed me. I tried to recover again but the rear problem was getting worse and at the end of the race I could only try to pass the Ducatis. I was a bit lucky that they ran wide in the last corner, so I could pass both on the final straight. Eighth is not a bad result but I’m a little bit disappointed because we did a really good job during the whole weekend and I was very confident for the race. Now I just hope I can carry the good performances from practice and qualifying into Brno.”

Herve Poncharal – Team Manager:
“That was a great race and I think every single fan that was here today certainly got exceptional value for money with that entertainment on track. Bradley had a very strong race as well. His start was unbelievable and it was great to see him right in the heart of the action so early. At the end he was never letting the Ducati pair relax for a second and a bit like in Assen he took full advantage of a mistake at the final corner. We can now head to Brno full of confidence that Cal will be challenging for the podium again and Bradley will be closer to the top six.”