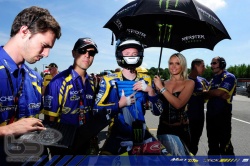 The 20-lap race ended in bitterly disappointing fashion for British rider Bradley Smith, who was confident of a strong showing having set the fifth quickest time in pre-race warm-up session this morning.

Starting from 16th on the grid, Smith produced his trademark aggressive first lap to gain nine places and force his way into seventh position.

Smith's brilliant early work though was unfortunately undone by a crash on the second lap while he was trying to force his way back into the points after narrowly avoiding Jules Cluzel's first lap crash.

The 20- year-old was able to walk away unhurt but he still lies seventh in the World Championship rankings on 79-points.

Bradley Smith DNF – 79-points:
"Obviously that is not the ideal end to a race and unfortunately that is two races in a row that we haven't finished. From that point of view it is very disappointing, but we had so many positives this weekend. We struggled with the bike on Friday and a little bit on Saturday, but we were able to find big improvements for the race. I was a bit unlucky. I got a great start and put myself in a great position to fight with the group battling for the top six. I knew I had to pass (Jules) Cluzel early as he had already lost the front group on the first lap. Then he crashed in front of me and I was lucky I stayed on the bike. Then when I was recovering from that incident I got tangled with anoth er rider and I had nowhere to go and I went down. It is not a positive end to the weekend but once again we showed that we have the pace to fight at the front. The Tech 3 Racing Team did a fantastic job this weekend and we learned a lot of new things that will help us for the future and I'm sure we will get the results we deserve soon.”

Hervé Poncharal – Team Manager:
"This was another disappointing weekend for the Tech3 Racing Team. Bradley was very fast this morning in the Warm-up and we were looking forward to him having a strong race to forget the bad luck of Germany. He made an awesome start and recovered a lot of positions and he was immediately close to the top six. Unfortunately again he had a little bit of bad luck. Cluzel crashed in front of him and Bradley told me that it was a miracle that he did not go out with him. He recovered but then there was another incident that he could not avoid and that is disappointing for the whole Team. When you have to push so hard in a class as competitive as Moto2, these things can happen, but we will look to bounce back strongly in Indianapolis and on a positive note he wasn't injured.”