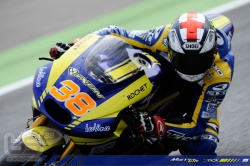 Tech3 Racing Team rider Bradley Smith had a frustrating afternoon after his superb bid for another top six finish thwarted by a rear tyre puncture in the early stages of the 26-lap race.

The race started on a dry track, but heavy overnight rain meant it was hard to gauge grip levels in the early stages after this morning's Warm-up session took place on a damp surface.

British rider Smith was denied a chance to follow-up his stunning fourth place in the recent Jerez Moto2 race with another top six result. The 20-year-old needed only four laps to break into the top ten from 15th on the grid. But a rear tyre stability issue began to worsen shortly before the halfway stage. Slipping down the rankings, he opted to pit where his Tech 3 Racing Team discovered he'd suffered the misfortune of a rear tyre puncture.

Smith opted to put in a new rear tyre to gain more information and data ahead of the Tech3 Racing Team's home race in Le Mans on May 15. He eventually finished in 29th position.

Bradley Smith: 29th – 20 points
"It was a difficult day and obviously we were unlucky to get a puncture in the race. At that point of the race I was already in quite a good position and I was feeling quite comfortable. The bike was getting better with every lap, so another top six wasn't an unrealistic goal. But I had a lot of movement from the rear tyre and I couldn't continue because I wasn't exactly sure what the problem was. It is very disappointing as everybody has been working hard all weekend and put a lot of effort in. So when you don't get the result you feel you deserve you can't be happy. I still crossed the finish line even though I was two laps behind and we can still take valuable data to the next races, especially for Le Mans, which is the team's home race and where I'll be desperate to do well for them. We will go back to the workshop in France now to fix some problems that we have and work hard and hopefully have a better pace for Le Mans."

Hervé Poncharal - Team Manager
“It is a real pity for Bradley. We knew he had the pace after this morning's Warm-up to challenge for a top six. Unfortunately we did not really see what happened, we just saw him losing ground and at the end he was so slow that we understood that there was a technical problem. A flat tyre is very disappointing to cope with and it is something that should never happen. Cred it to Bradley because he wanted to get back in the race do his best for the Team. It is a pity that his hard work didn't get a top six he deserved.”