Smith increases the pace on day two in Malaysia 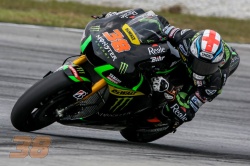 Bradley Smith continued his testing assault at the Sepang International circuit on day two by producing another encouraging performance to close the session in seventh position. The young British rider completed 50 laps around the famous Malaysian circuit and clocked his best time of 2’00.329 on the 49th lap at the end of the day. His performance highlighted a significant cut of nine tenths of a second from yesterday and saw him notably only 0.231 back from third position.

Headway was made today after some constructive work by the Monster Yamaha Tech3 Team with the English rider who will seek to maintain the positive momentum tomorrow as he grows more confident with the 2015 specification Yamaha YZR-M1 on every run.

Bradley Smith: - Position: 7th - Time: 2’00.329 - Laps: 50
"Today was a really positive day for me and the team. We began by doing a race simulation in the morning which was our main objective, in order to collect data and feedback. In addition, it was also so that I could understand the new 2015 Yamaha better and see how it handles during a race simulation with full fuel load or used tyres. The race run was very positive and I was able to stay consistently strong during the 20 laps, which indicates the team have done a good job and I have also with my training during the winter months. This afternoon I was able to improve the lap time and it was the closest that I have been to the front so far as I was just behind Valentino and 0.3 from Jorge, which is pleasing. Tomorrow we just need to continue with the testing programme and improving the bike. We are already doing a great job and are 95% there."