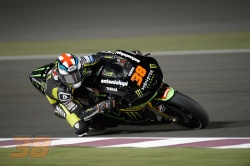 The second night of practice in advance of the 10th running of the Qatar MotoGP race in Doha on Sunday evening saw Bradley Smith shine under the impressive Losail International Circuit floodlights.

Smith adapted superbly to the difficult conditions and he defied a lack of experience on his YZR-M1 to rocket into the top six at one stage in FP3.Growing in confidence as he slashed big chunks of time off his pace, Smith ended with a best time of 1.56.901 to finish in a morale-boosting ninth position on the combined leaderboard.

His final speed was a huge improvement of 1.4s compared to his best pace in last night's opening session and it was mission accomplished for Smith, who achieved one of his main pre-race goals to finish inside the top 10 after FP3.

Tonight's result means under the new qualifying format, both Crutchow and Smith are automatically seeded into tomorrow night's second 15-minute qualifying session in which 12 riders will battle it out for grid positions on the first four rows.

Bradley Smith 9th - 1.56.901:
“I am really happy because one of my big objectives was to make sure I was inside the top 10 tonight and straight into the second qualifying session. Now I've done that I feel like it is a big achievement that I am really proud because it was not easy. I found well over a second in the final session and to finish just over 0.8s away from the top is a fantastic result for me. I didn't realize just how hard you have to push the bike to get down to that pace and it is going to be very hard to ride at that intensity for the whole race. Credit to the other guys who run a consistently fast pace throughout the race because it is incredibly hard and something I will need to focus on improving. My Monster Yamaha Tech 3 Team did a great job tonight. They gave me a bike that gave me a lot of confidence and that was proven in just how much faster I was in the final session. I am less than 0.5s away from Valentino so I am really pleased. There's still a lot of work to do on the race set-up but I am truly happy to be inside that top 10.”