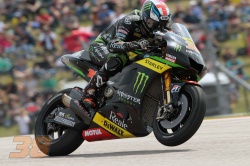 Bradley Smith produced a memorable ride at the Circuit Of The Americas to claim the honours of being the top satellite rider by seizing 6th place in Texas. The 21 lap race start was delayed due to a spillage caused by a bridge near turn three which caused water to leak on to the track.

However, once the surface conditions were resolved, the race began at 14:37 local time. The young British rider leapt off the starting grid from 10th and his impressive start saw him tenaciously cruise around the outside of the pack to jump up to 4th after the first corner, expertly overtaking six riders from the start. Smith remained resolute and set a series of highly competitive and consistent lap times as he remained right in the hunt with the leading pack in 4th place. At the mid point, the Briton was running in 6th with his determination intact and his tireless performance saw him keep the pursuing rider at bay to brilliantly cross the line as the top satellite MotoGP rider and only 10.557 behind the leader.

With two rounds complete, Smith is 6th in the championship standings with 18 points as he optimistically looks ahead to the next round, confident of a further strong finish.

Bradley Smith: - Position: 6th - Championship: 6th - Points: 18
"It was a great race and I am pleased with the result. It began with a strong start and to jump from 10th up to 4th was pretty awesome. The risk I took to go around the outside of the pack at turn one paid off. I have been studying previous races and saw how other riders got pinched on the inside, so I decided to gamble and go around the outside. After that, I was running comfortably with the leaders for the first five laps, but when Marc went past Andrea I was just missing that extra bit of pace. At one point in the race, I was concentrating so much on staying with the group in front that I forgot to alter the traction control map and so I overheated the tyre and as a result, I lost some pace. Anyway, I am pleased with the outcome and to finish in 6th place, as the top satellite and only 10 seconds is definitely one of my best performances in my MotoGP career. Now I look ahead to Argentina and although I struggled a bit last year, with the new M1 and Bridgestone tyres, we should be competitive. It’s a Yamaha track so we need to try and continue this positive momentum from the first two races so far. "

Hervé Poncharal - Team Manager:
"As the team manager, I can’t be completely happy about today’s result, because when you lose one of your two riders, it’s never a great feeling. Having said that, we are so happy with what Brad achieved. Yesterday he had a technical issue in qualifying which prevented him from showing his true potential. Yet, he remained confident and had an incredible start, but even though his starts are often good, I think this was one of the best of his MotoGP career. The most exciting thing is that Brad managed to stay with the factory guys and he was with Vale for more than half of the race distance which was very impressive plus he will have learnt a lot. Furthermore, it took a long time for Jorge to catch and then pass him, so our target is to always to be as close as possible to the factory riders which is our benchmark and Brad accomplished this today. We finished with the smallest gap to the leader that we have had in quite a long time and we also completed the race in front of Cal which is another one of our missions. We know that Pol would have been very fast here and it would have been brilliant to see this. Of course, he will be disappointed, but sometimes these things happen in races, however we are pleased with his progress so far and we will keep on working. He is good enough to be near the top group therefore we expect him to be back in that position at the next race. We were the best satellite bike, Brad is 6th in the championship and we are fourth in the team standings, so just like the weather today, everything is good! We hope to have two top riders next week in Argentina and we will see you there."