Smith to start from the fifth row for Spanish Grand Prix 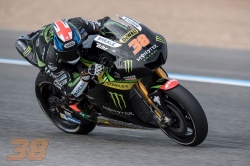 ​Bradley Smith dug deep in qualifying today and will begin the 4th round of the 2016 MotoGP World Championship from the middle of the fifth row. The 25 year old battled throughout the morning practice before eventually finishing in 14th, meaning that he would have to participate in qualifying 1. When the session started, the British star determinedly set off and after a thorough effort, he posted his personal best on his penultimate run. Tomorrow, the Tech3 rider will aim to undertake a rocket start and then fight through the field to a positive result.

Bradley Smith: – Position: 14th – Time: 1'40.242 – Laps: 8
"Today we didn’t improve as much as I needed to. I thought low 1’40 lap times would have been strong enough to get into QP2, but everybody upped their game and in the end we needed a 1’39 to progress directly through to QP2. To be honest, today I was on the limit and unfortunately we didn’t find the next step with the bike. A 1’40.2 lap seems to be where I am at the moment as I did three consistent laps, once this morning and twice this afternoon, so I thought that I had extracted the best that I could from the Yamaha. Now, we have a lot of data to analyse and try to assess in preparation for tomorrow, and starting from 14th on the grid isn’t going to make the GP any easier, especially at this track. However, I’ve been practicing my starts all the weekend and they are getting better so tomorrow I need to make a special one and then pass as many riders as possible in the first few corners. From now until tomorrow we will try to improve the bike so the team will have a busy afternoon searching for the final tenths because my race pace has to be stronger too. We know that we are in a tricky situation but we’re still ready to give it everything we’ve got in the Grand Prix tomorrow and we’ll do our best until then.