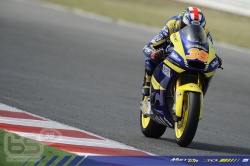 Bradley Smith fought for the podium throughout a pulsating Moto2 race at the Misano circuit this afternoon, the British rider eventually finishing in a superb sixth position in hot and humid conditions.

Smith expertly anticipated the lights going out for the start of the 26-lap race and gained two places on the opening lap to settle into fourth place. The fast starting Andrea Iannone bumped him down to fifth on lap two but he remained firmly in the hunt for the podium and was less than a second away from the lead just after the halfway stage.

The Tech 3 Racing Team rider showed no shortage of fighting spirit but despite being within touching distance of the rostrum like he was a week ago in Indianapolis, he was unable to get close enough to make a decisive attack.

Smith was still satisfied with his performance after finishing just 3.436s behind race winner Marc Marquez. And his sixth top six finish of the 2011 World Championship campaign moved him into fifth in the overall rankings, just 10-points away from Iannone in third.

Bradley Smith 6th – 102 points:
"I suppose we have been consistent in the last couple of races as I qualified fourth in Indy and finished fourth and here I qualified sixth and finished sixth. It was great to be so close to the podium again and that was definitely the best bike we have had this year, so a big thanks to the Tech 3 Racing Team. We are lacking in some areas compared to the guys around me though a little bit. I needed a couple more tenths but at least I had a bike that I could run close to the leading group with. I learnt a lot racing behind those front guys and as a team we learnt a lot this weekend. Hopefully the improvements we found with the rear of the bike here will also work in Aragón and we can move forward and finish the season strong. I am fifth in the Championship and I have more than 100 points, so there are so many things that I can be positive about and I am looking forward to the next race."

Hervé Poncharal – Team Manager:
"The beginning of the race was not easy, so I have to give big congratulations to Bradley and his Tech 3 Racing crew. They were working incredibly hard to improve the Mistral 610 package all weekend and in the warm up we could see the improvements. We were always in the front group putting pressure constantly on the best riders in Moto2, so he did another great job. I got nervous as he closed the gap to Scott (Redding) but I think it was very wise in the end to settle for sixth position. I'm sure if he could have though he would have attacked for some home pride. After a few difficult races it was good to back up the good result in Indy with another strong race. We are still very close to the top three in the Championship and that is our goal, but there are a lot of fast riders in Moto2. Thankfully we have one of them and Bradley has once again demonstrated how competitive the Mistral 610 machine is."