Smith to challenge Argentinian GP from 10th on the grid 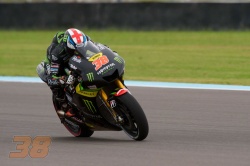 Monster Yamaha Tech3 Team rider Bradley Smith will launch from the head of the fourth row of the grid for the Argentina Grand Prix at the fast flowing Autodromo Termas de Rio Hondo. After finishing this morning's free practice 3 in 13th, which saw the British rider qualify for QP1, the 23 year old concentrated on assessing different setup options in FP4 as he completed the session in 12th position. With the sun shining down on the circuit for the crucial qualifying sessions, Smith shot to the top of the heap with an impressive lap of 1’38.956 during QP1. This time permitted the Briton to progress through to the final 15 minute shootout.

Smith powered onwards as he sought a top grid position and set his personal best on the 6th lap with a 1’39.197 which confirmed his starting position of 10th tomorrow. The young British star remains confident for tomorrow's race where he will intend to once again challenge for the position of the leading satellite bike in the premier class.

Bradley Smith: – Position: 10th – Times: 1'39.197 – Laps: 8
"Obviously, it was not ideal to go through QP1 again today, but I managed to post a really good lap time that allowed me to get into qualifying 2. Unfortunately, there was only one compound of my favoured front tyre left which I decided to keep for the race tomorrow and so I had to run with a used one in qualifying 2. As a result, I couldn't push as hard as before but nevertheless, we did an ok job considering that the tyre had already covered a full race distance in the end. Perhaps we could have been a position or two higher, but 10th is acceptable and especially as it has been quite a tricky weekend so far. Now, we will focus even more on the race pace as this is vital in terms of success tomorrow. Having a competitive bike for 25 laps is highly significant as there is a big tyre drop here and therefore, there is potentially a lot of time to gain. So this is what we will focus on tomorrow in the warm up. The team did a great job and I must say thanks to them as they turned my bike around and adjusted it to make me feel more comfortable on this track. We need to continue working a little bit more, but we are starting to find the right direction to head towards. This may be a bit late in the race weekend, but Sunday is where everything matters."