Smith to contest Mugello battle from the fourth row 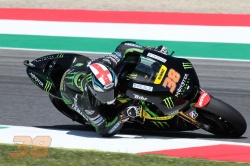 Monster Yamaha Tech3 Team rider Bradley Smith will begin the 30th MotoGP race at the Mugello circuit, from 11th on the grid. The 24 year old rider started the day by closing the FP3 session with a lap time of 1’47.495 that left him in 8th position and able to progress straight through to QP2. Here, the British star pushed hard throughout the session before producing a flying lap of 1’47.090 as the chequered flag fell. This saw him finish just a blink of an eye behind his teammate by 0.040 and additionally, he set the fastest top speed of the Yamaha MotoGP bikes which was 344.2 km/h.

Tomorrow, Smith intends to continue his notable form so far in the 2015 MotoGP season and his sights are firmly set on scoring a solid result in order to continue his fight for the lead in the satellite bike standings.

Bradley Smith: – Position: 11th – Time: 1'47.090 – Laps: 8
"I am certain that I can score a good result in the race tomorrow, despite making things a bit difficult for myself by qualifying in 11th. With the times being so close, it was tough and I didn’t have a perfect lap around the circuit in QP2. We changed the bike quite a lot in FP4 in order to gain a good setup for the race. Yet, when you make big changes, it’s a bit of a gamble, especially for qualifying so it was difficult to extract the best that I could in such a small amount of time, which is why I am back in 11th. However, I still feel confident for the race as the setup we have now is very consistent. Usually my starts are good so tomorrow, I need to have a strong launch and then fight onwards. There’s a lot of open bikes in front of me but at the end of the day, the race is long so I simply need to try and overtake as many riders as I can throughout the race, be smart at the beginning and we will see where we can go from there."