Smith to contest Sachsenring battle from 9th on the grid 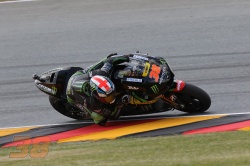 Bradley Smith will begin the 30 lap sprint around the 3.7 kilometre circuit from the rear of the third row on the grid after a resolute effort in qualifying today. The young British rider started the day with a rapid pace in FP3, where he finished in 5th position and which elevated him through to the QP2 face off.

Here, he leapt into action and pulled the plug instantly as he did his upmost to clinch a top qualifying time. However, he was forced to enter the pits in order to repair the windshield at the end of his first lap after pulling off a dramatic save to prevent himself from a high side. Nevertheless, Smith determinedly returned to the track soon after and on his penultimate lap, he set a 1’21.329 which certified 9th on the grid, but was just over a tenth of a second from the second row. Tomorrow he will launch from the starting grid and will then intend to record a ninth successive top eight finish in 2015 at the GoPro Motorrad Grand Prix Deutschland.

Bradley Smith - Position: 9th - Time: 1'21,329 - Laps: 10
"Overall, I am optimistic for the race tomorrow, despite the fact that I’m a little bit disappointed with my final qualifying position today. The slide that I had on my bike during my first flying lap affected our qualifying quite a bit. I didn’t take full advantage of the first set of tyres and then I was too nervous on the second pair, especially on my final lap where I lost a lot of time in the last sector due to this. Therefore, I’m a bit dissatisfied as my objective today was to qualify on the front two rows and even though we are not too far back from there, we are 9th and not 6th. However, to be starting on the inside of the track might be an advantage here. In addition, I have a good race pace and am confident with the bike and even though it will be a tricky event as the tyres drop quite a lot here, I am ready for a good challenge."