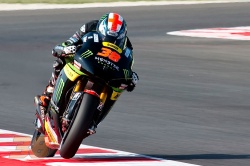 Monster Yamaha Tech3 Team rider Bradley Smith made it four second row starts in as many consecutive races today after a superbly executed performance in qualifying. The British star began proceedings on day two by closing the FP3 session in 7th position and was able to comfortably progress through to Q2 after continuing his efforts in adjusting the setup of the Yamaha YZR-M1.

Smith and his Monster Yamaha Tech3 Team carried on their work together in the FP4 session ahead of QP2 which left the 24 year old rider confident for the qualifying assault. When the 15 minute shootout started, he bolted into action aboard the Yamaha YZR-M1. After building up his speed, Smith powered to a best time of 1'32.801 on his 6th lap which, when the chequered flag fell, equalled a start on the rear of the second row tomorrow. In addition, this time saw him finish as the leading satellite rider. The Briton will now be seeking to have a strong start and fight as close possible to the leading factory MotoGP bikes in order to add to another positive collection of points to his world championship tally.

Bradley Smith: – Position: 6th – Time: 1'32.801 – Laps : 9
“I have to be really pleased with the job that we undertook today as we reached our target of the second row again. That is really important here due to the layout of the circuit. Tomorrow, it will be crucial to get a good start and I'm actually on the inside of the track on the run into the first corner, which is a positive place to be. We improved the bike a lot in-between FP4 and qualifying and I know we can build on this even more in the morning's warm up, so I feel really optimistic about improving my feeling further in terms race pace. It's going to be a difficult GP mainly because it's so easy to lose the front and we have seen this happened to many riders so far this weekend. So it will be key to be very careful with both ends of the bike and the most important thing is that I must remain consistent and smooth. However, I'm truly confident with the YZR-M1 and with my tyre choice so I am ready to do battle for a strong finish.”