Smith unable to find positive feeling with his Mistral 610 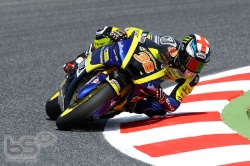 The British rider set a best time of 1.47.423 having been unable to find the same positive feeling with his Mistral 610 machine he had during the Ales test session in France.

The 21-year-old though remains in high spirits and determined to battle for a top six result in the fifth round of the 2012 Moto2 World Championship.

Bradley Smith 13th 1.47.423 – 18 laps:
“I suppose I have to be happy because I am much higher up the grid than I was in Le Mans. But I thought doing a lot of laps at the test in Ales would put us in a better position and unfortunately that hasn't been the case. We will check the setting we have used at other tracks and maybe use that for the race, but I still expect to be battling in the second group. That would be for the top six, so I need to make a good start and be very aggressive in the early part of the race. Tyre management is going to vital if the conditions are really hot again, so it will be a case of being aggressive without wearing the tyres too quickly.”