Solid points for Smith in race one at the Dutch GP 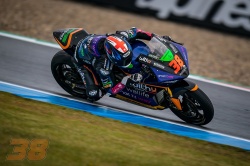 The typical changing Dutch weather delivered some difficult conditions on Friday. After FP1 was taking place in wet conditions, FP2 was cancelled, leaving Bradley Smith and Niccolò Canepa only the short 10 minutes Qualifying two to improve their feeling ahead of the first race of eight laps today, which took place on a dry track again, when the sun was back at the legendary TT Circuit Assen.

Canepa, who secured his best grid position with P6 yesterday, got in traffic in the first lap and went back to eighth, while Smith was losing a position and went from P8 to P9 on lap one in his first race back following several months of a break due to injury. Within the first few laps, both could kept up with the pace of leading group and just gradually lost a bit of contact. On the third lap, Smith passed Canepa for seventh, yet the Italian WithU GRT RNF MotoE Team rider, who doesn’t feel 100 percent fit this weekend, came back on his teammate just two laps later.

Both made up another position towards the end of the race and while Canepa eventually crossed the line in seventh, just 2.810 seconds from the lead, Smith followed in eighth position, 2.5 seconds behind Canepa, who settles for sixth in the overall standing of the FIM Enel MotoE World Cup now.

Both WithU GRT RNF MotoE Team riders aim to do even better tomorrow when the red lights go off for the second race of the weekend 15:30 local time in Assen.


Bradley Smith:
“The first race back as always going be difficult, I was racing into the unknown. I've not done a race this season and you have to manage the tyres in MotoE, as they are different than the ones I used in the past. The behavior is a little bit different. Anyway, to improve 1.4 seconds on the lap time and my opening four laps overall were good. Then we got a little bit high with the tyre temperature and with the tyre pressure. To come back in front of the reigning World Cup Champion (Torres) in my first race back was positive. Tomorrow we want to improve, but considering everything, I was there in the opening laps, so we have to be pleased.”