Strong opening performance by Tech3 under the floodlights in Qatar 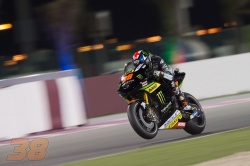 ​Bradley Smith delivered a notable performance today after completing the race just a blink of an eye behind his teammate by only 0.023 of a second. The young British rider began the sprint from 11th, but moved up one place by the end of the first lap. Then, he quickly locked into his race pace and homed in on the positions in front. By the mid point, Smith was in 9th and remained with Espargaro as the race distance progressed. On the final lap, the pair exchanged passes, with the British star finishing right behind his teammate by a hair's breadth. His effort today strongly outlines his desire to win the leading satellite honours which he will fight for again at the next Grand Prix in Argentina.

Bradley Smith: – Position: 8th – Championship: 8th – Points: 8
"I am pleased with the race result today, but the start was a complete disaster, so from there onwards, I knew that things could only get better! I tried to make a few passes in the opening laps and found myself in the position with the other satellite riders. Then I tried to get into my rhythm and aimed to not make any mistakes. In addition, I wanted to understand as much as I could with the new setup for the race and how the bike behaved in the 22 laps. As time ticked down, I got into a good fight with my teammate, plus he was really strong on the brakes into the first corner. Before that, I passed Barbera when he made a mistake and after having finally an open track in front of me, I got some confidence, put my head down and went for it. It was fun chasing Pol with three laps to go and it’s been a while since we’ve had a really tough battle like that. On the last lap, I made the pass into the final corner, but the fact that he is four kilos lighter than me made the difference on the way to the line! It’s been a very tough weekend and we started on a difficult note on Thursday and Friday, yet the team did a fantastic job and kept on working hard. We stayed focused and in the end we came away with 8th position, which is already one place better than last year. In addition, we are only one point away from our target which is to be the top satellite bike and so we will try to rectify that in Argentina.”

Hervé Poncharal - Team Manager:
“I am very happy that we have started the championship in the way that we did today. To be honest, we were all wondering what was going to happen and how the race would be with the new electronics and tyre manufacturer, even though we did some simulations. It was a bit of a grey area for everyone but I think our two guys did a really strong job. The start was not incredible but it was solid enough for Pol and Brad to be in decent positions. Then they pushed and passed quite a few guys, so in the end I think we ended up where we should be. There was quite a tough battle between our boys and at one stage I was a bit worried! However, they showed respect to each other and just 0.023 between the two shows that we have a very competitive team. This is a good way to start, and for Pol to claim the first independent rider means a lot to us, but to be first and second in the satellite standings is great. Next up is Argentina but clearly, we are happy to have completed our first 2016 race. Honestly, I didn’t expect us to be this competitive, yet, this is a great sign and I’m sure that we will be closer and closer in the next few rounds.”