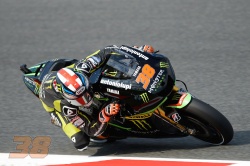 Smith’s joy at his first top six in MotoGP was countered though by a disappointing afternoon for on form Cal Crutchlow, who saw his quest for a record-breaking third successive podium ended when he fell unhurt out of fourth on lap six.

Smith’s weekend ended on a positive note after the 22-year-old bounced back superbly from a heavy crash on Friday, which followed two nasty falls during the previous round in Mugello.

Nursing a badly damaged little finger and fractured bone in his left wrist after the Mugello crashes, Smith brushed aside the pain and discomfort this weekend and he needed only three laps in baking hot conditions to move into the top 10.

With a track temperature nudging a sizzling 52 degrees, tyre management became a critical factor on the slippery surface. Smith coped with the tricky track conditions more like a seasoned campaigner than a rookie and his maiden top six was secured when he passed Andrea Dovizioso on lap 23, having recovered a gap to the Italian that was over four seconds at one stage.


Bradley Smith 6th – 34 point:
“Obviously today was a much more positive result for me, even if sixth position looks a bit better than it really is. But at the end you have to finish the race to score the points and I did that in difficult conditions while not at my 100% physical best. So it is a great result for the team and me. I really focused on the first eight laps trying not to make any mistakes and trying to stay as close to Dovizioso and (Stefan) Bradl because I knew they should have been more or less on the same race pace as me. I tried to attack Espargaro as quick as possible so I didn’t lose too much time and I managed that. Finally to be in a fight with Andrea towards the closing laps of the race, knowing that he has been always very strong during this part of the race, was obviously something special and makes me feel proud. And to finish 32 seconds behind the winner is another great step and I just want to continue like this until the summer break. My team did a fantastic job to help me on the YZR-M1 and we really turned around a difficult Friday to have a great result on Sunday and that makes me really happy.”