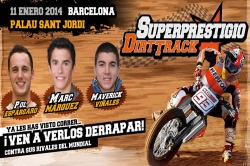 Bradley will face a new challenge this weekend on an oval dirt track alongside Marc Marquez and new team mate Pol Espargaro.

The event, held at the Palau Sant Jordi indoor sporting arena which is situated on Barcelona’s Montjuic – the hill itself having been the scene of World Championship motorcycle races on eight occasions between 1951 and 1972 – will feature all three of the 2013 MotoGP™ World Championship title winners, as Maverick Viñales will also be competing.

The race takes place on an oval track, completely flat using supermotard type motorcycles with 4-stroke engines, slick tires and no front brake, which guarantees the performance of 'the skid', characteristic of the dirt track .

Following practice and qualifying sessions on Saturday morning, the riders will be challenged with further qualifying heats and numerous races in the afternoon including four Finals for the Superprestigio machines, culminating with the Superprestigio + Open Super Final at quarter to nine in the evening.

Across the afternoon and night, crowds will witness whether the MotoGP™ riders can truly take on AMA’s Brad 'The Bullet' Baker who – at the same age as Marc Marquez – clinched the 2013 AMA Pro Grand National crown.

Joining Baker from the US is Merle Scherb, another AMA Pro flat-track competitor and instructor at the Texas Tornado Boot Camp.

Merle Scherb:
"I’ve raced dirt track my whole life and I’m super stoked to get to see what it’s like to race in Spain.” Scherb goes on to say, “It’s an honor to race in Marc Marquez’s event. Bradley Smith definitely hooked me up with more than I could ask for. I can’t wait to represent the United States and the Texas Tornado Boot Camp!”

Bradley Smith:
"I have to say I am very excited to be taking part in the Superprestigio Dirt Track event. Dirt track is my new found love after visiting the TTBC with Colin Edwards for the last couple of years. As with all racers we are competitive and it’s nice to be back racing after already 5 weeks since Valencia GP. I’m excited to be joined by Merle Scherb for the event, he will be teaching me a few ‘thangs’ in the 2 days testing we have planned before the race.”

For more information check out: dtxbarcelona