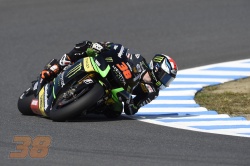 Bradley Smith rode a firm and tireless race to clinch 9th position at the stop and go Twin Ring Motegi track. The young British rider began his challenge from 10th on the grid and ascended up one place by the close of the first lap as he looked to make further ground in the field. He then set into a competitive rhythm as he stayed with his team mate just in front of him in 8th.

By the mid point of the 24 lap dash in Japan, Smith remained in this position and battled onwards as the laps proceeded to count down at the hard braking 4801 meter circuit. The 23 year old set his fastest lap on the 15th as he continued to push thoroughly right to the finish line which he crossed in 9th at Yamaha’s home Grand prix. This result leaves the British star fully confident for the two remaining flyaway races where he intends to clinch further point scoring finishes to boost his standings in the World Championship.

Bradley Smith: – Position: 9th – Championship: 10th – Points: 92
"Although 9th position is nothing to be hugely excited about, there are still a lot of positives to take from today’s race. In terms of the distance back from the leader, I would have been inside the twenty second bracket with Pol, had I not made a small mistake with three laps to go. However, my finish today was still one of the closest for me this season, which is a good step forward. I made this mistake on the first corner which unfortunately caused me to miss out on potentially fighting with Pol and Bradl, so I completed the race in 9th. This position seems to be where we are at right now or at least for this race and I extracted the most from myself and my motorcycle here in Motegi. However, in Philip Island I am sure that we can have a better result as it is a track that I really enjoyed last year on the Yamaha, which performed well. So, I hope to take the consistency and the positives from here and turn it into a stronger result in Australia next week."

Hervé Poncharal - Team Manager:
"It was a very exciting race weekend with a lot of tension, but primarily I would like to pass on my very warm congratulations to Yamaha for the three wins in a row. We all know that Motegi is a big race to win, with it being Yamaha’s home race and I am very happy for them as well as being proud to be part of the family. With regards to Tech3, it was a good start and a strong race for both riders, although of course we are aiming for much higher than the end result we achieved today. Clearly the top four MotoGP riders are on another planet with a rhythm which we can’t quite equal at this moment. Then there are the two Ducati’s who are in between the leading four and the rest and at present, we are just behind them. It was very close at the end and exciting to watch Pol and Bradley recovering time on Bradl, but unfortunately they couldn't make their way though and 8th and 9th is not where we want to be at the end of the day. Yet, to have two riders inside the top ten plus collecting strong points for the Championship standings is a positive for this weekend in Japan. It’s important to learn race by race and to use this information so that we can progress and be closer to the leading bikes. A twenty second gap to the leader is not bad, but we must be nearer at the end of the race in the future. Philip Island is next and hopefully we will have a good chance to reduce this distance to the front bikes."