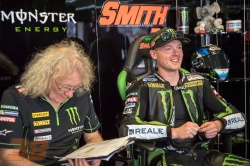 Monster Yamaha Tech3 team rider Bradley Smith leaves Barcelona feeling optimistic for the future rounds after undertaking a thorough post-Catalan Grand Prix test today. The British rider concentrated mainly on the new Michelin tyres, as he evaluated all three of the new rear compounds available plus he tested different rear suspension options. He tirelessly lapped the circuit 83 times, which was more than any other MotoGP rider, but also crashed at turn five on his last lap. The 25-year-old set his best time mid way through the day and on his 44th lap, which left him less than a second from fifth. Having reached a positive conclusion, the 2015 fastest satellite rider now keenly awaits the forthcoming Motul Dutch Grand Prix where he intends to clinch the top independent honours.

Bradley Smith: – Position: 12th – Time: 1'45.670 – Laps: 83
"In general, today was positive and we can leave Barcelona feeling content with what we achieved at the test. After the technical issue in yesterday’s race, I am really pleased to complete 83 laps without any issues at all. I did a lot of tyre testing this morning for Michelin and they brought some interesting options so I'm excited to see how the tyres will evolve in the future. With regards to our setting, the main area of focus was the rear of the bike which seems to be where I’m most sensitive at the moment. We had quite a few different rear shock solutions that we wanted to try and although the result won’t necessarily boost performance, it will certainly make our weekend easier if I am struggling like I was here. Now, we have a good direction as well as more of an understanding about my YZR-M1. I’m always happy about these types of test because, like in Jerez, I can leave with more knowledge and added confidence for the package that I have. I will rest up now for two weeks and then get ready for Assen which I am looking forward to."