Tech3's Smith prepared for fight to top 5 at Texas 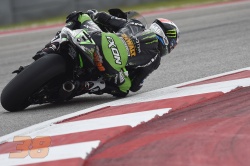 The Monster Yamaha Tech3 Team’s riders produced another strong-minded display in qualifying today and will begin the Circuit of the Americas Grand Prix with Bradley Smith in 8th for the second round of the MotoGP World Championship. Smith moved straight into the qualifying practice2 as he made further steps forward after a challenging start in yesterday’s opening sessions.

Bradley produced another sterling display at the long and twisting Texan track with the Monster Yamaha Tech3 Team. Despite the complexity of the Circuit of the Americas, Smith continued his encouraging performance and leapt forward to 5th in FP3, as he was the quickest of all the Yamaha MotoGP riders. During QP2, he knocked off another two hundredth of a second from his FP3 time, but ultimately finished in 8th place, only half of a second behind the Factory Yamaha of Jorge Lorenzo. His fastest time was also a colossal improvement from last year’s best qualifying time, by almost three seconds. The young British rider’s performances so far this year confirm his determination to be the leading satellite bike, as he aims to fight for a top 5 finish in the 21 lap race tomorrow.

Bradley Smith - 8th - 2:03.800:
“In general, I am quite satisfied with 8th poshave improved by 1.6 seconds from yesterday, which is positive and also a huge leap compared to the qualifying time from last year. I set a good lap time in FP3 which I was then able to better by two tenths later on in QP2. Unfortunately, I made a mistake in the last sector during my fastest lap which cost me around 3 tenths,  and I would have been only 0.2 seconds from the Factory Yamaha bikes if this hadn’t occurred, which is an acceptable gap. So now we need to analyse the information, see where we can improve furthermore and make another step during tomorrow’s warm up. Anyway, I am really looking forward to the race where I will focus on getting a good start, and being as aggressive as possible to get into the top five at the first corner. No doubt, it will be a tough GP with plenty of overtaking, so I have to be prepared to pass other riders and keep a good lap time for all 21 laps.