Terol continues to set the pace 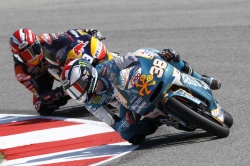 Just five days after the 125cc World Championship teams and riders packed up at Indianapolis they were back on track today with the kind of commitment and vigour they are famous for. The three Spaniards that lead the championship also led the way today, Terol, Márquez and Espargaró continuing their season-long battle for supremacy in the minor category. Today it was the Bancaja Aspar man Nico Terol that came out on top after improving his pace lap after lap.

There can be little doubt that Terol is in great form and that his Montmeló injuries are now but a distance memory. The Spaniard has won two races on the bounce and set his stall out for a hat-trick attempt today, dominating the opening session and leading the time sheets for the last twenty minutes. His 22nd of 26 laps stopped the clock at 1'44.229, which will be the benchmark when they return to the track tomorrow. His team-mate Bradley Smith, who has been on the podium here for the past two seasons, had a little more trouble getting to grips with the circuit today as he tried some solutions for his Aprilia that didn't have the desired effect. Despite that he set the seventh fastest time - 1.2 seconds off the pace of Terol.

7th Bradley Smith 1.45.438 (22 laps): "In general today was a little less productive than I'd hoped. We tried some new things with the engine but they didn't work and that set back our work with the suspension and we lost our way. The good thing is I got a lot of laps in so we have plenty of data to study what happened and trace back our steps tomorrow. Despite everything my feeling with the bike is quite positive but we're still a long way off the top so we have to keep working to close the gap tomorrow."