The wait is over as Tech3 unleash the 2015 beast 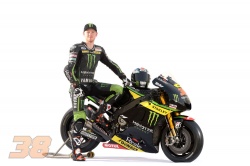 The Monster Yamaha Tech3 Team is delighted to pull the covers off the 2015 Yamaha YZR-M1 and present the new race colours that Bradley Smith and Pol Espargaro will ride to glory in for the 2015 MotoGP World Championship which begins in a few weeks’ time.

After the long winter period, and the final pre season test at the Losail International circuit in Qatar, complete, the team is ready for the championship to start on March 29th. Smith and Espargaro will take their prototype MotoGP bikes to all corners of the planet in the 18 round season and for the next 240 days, the riders will cover 2,109 kilometres in race distance before finishing in Valencia, as they battle for top honours.

Monster Yamaha Tech3 would like to thank Monster Energy, Dewalt, Stanley, Facom, Reale and Motul as well as its other partners for their involvement, which allows the team to contest in its 15th year in the fastest motorcycle World Championship in the world.

You can visit the gallery here.