Unfortunate end to the final round in Valencia 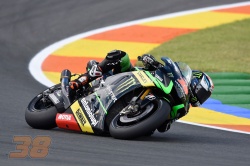 Bradley Smith concluded his 2014 campaign with a ride to 14th after an unfortunate final round in Valencia. The British star started the race from 7th on the grid, but was shuffled down to 11th place by the end of the first lap. However, Smith persisted with his efforts to jump back up the field in order to score a top result as he set into a fierce race pace.

By lap seven, the 23 year old rider had reached 8th position and continued to climb. Yet, with more spots of rain falling at the 4005 metre Ricardo Tormo circuit, Smith unluckily fell on lap 17, before re-joining to end the lap in 20th. Nevertheless, the young British rider proceeded forward and a final dash in the last laps saw Smith make up ground as well as six places to cross the line in 14th. The performance today marks a challenging yet resolute end to the 2014 season which sees him finish in 8th position in the world championship standings.

Bradley Smith: – Position: 14 – Championship: 8th – Points: 121
"Overall, it was positive to be able to finish the race after falling, but today’s result didn’t reflect the true performance that we would have been able to achieve. The bike felt extremely well so firstly, a big thanks to my team for the work that they undertook and in all honesty, I am sure that I could have fought for 4th position. However, unfortunately at the beginning of the race I was pushed out wide by my teammate and then afterwards my fight with Aleix cost me further time so I lost the gap to the Ducati’s. Yet, once I was able to get in front of my group, I could run a good pace and recovered some time on the riders in front of me. Then I made a mistake going into turn 8 when the track was slippery due to the rain and I locked the front tyre. When I tried to get back on track, I tried to use a shortcut but a marshal stopped me which made me lose further time so it would have been better to turn and come back sooner. For sure, I will learn from this mistake and I am sorry to the team as we lost the 7th position, but I am still satisfied with the final placement in the standings. Furthermore, I hope to begin 2015 with a similar high to how we have performed in the second half of this season."

Hervé Poncharal - Team Manager:
"It was another potentially great race for the fans as well as for the Monster Yamaha Tech3 Team and yet again there was another round spoilt by the weather. For sure, the 2014 MotoGP class has suffered with the weather interfering on race day, but everyone has to deal with it but it certainly didn’t help our performance. Both Pol and Brad were competitive in practice and qualifying, so looked promising for the final race. Unfortunately both riders didn’t get off the line as strongly as usual and then the rain came. Until Bradley crashed we were holding third in the team championship, which is a shame to lose, but of course there are more important things to be concerned with. When he fell, it was a slow and not damaging one but he still lost a lot of positions. This was a real pity as he was lapping really well and he was actually the second fastest rider in terms of lap times on the track towards the end of the race which helped him to recover to 14th. Perhaps with one additional lap, things would have been more positive as he could have climbed even higher. Brad was unfortunate, but this is racing, you have to be fast, lucky, cleaver and also finish the race. Now that the season is over I must say thank you to both of the riders, the whole team, Yamaha and the partners for their efforts. Everything starts again tomorrow as we now prepare for 2015."