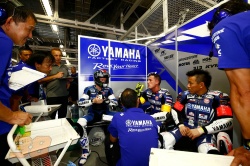 As the second day of action unfolded today in preparation for the legendary 38th “Coca-Cola Zero” Suzuka 8 Hours Endurance Road Race this Sunday, the Yamaha Factory Racing Team continued to impress with their dominant form in practice and qualifying.

Riders Katsuyuki Nakasuga, Pol Espargaró and Bradley Smith picked up where they left off yesterday at the top of the timesheets to set a blistering pace in the first free practice with a 2’07.888s lap. Smith endured a small crash in the final stages of the session, but it had no lasting effect on the bike or the rider. In fact, they then raised the stakes even further. As the sun shone down on Suzuka and the track temperatures rose, the trio used the YZF-R1 to its full potential in the first qualifying session, the only team to drop under the 2’07 mark with a stunning 2’06.877s lap.

The Yamaha Factory team continued their form in the afternoon with Nakasuga making the most of his vast knowledge of the Suzuka Circuit. Espargaró took a tumble on a fast lap near the end of his riding session whilst overtaking a slower rider but was luckily uninjured. Both he and Smith made another step in improving their track knowledge with the team finishing in second, 0.419s from the front.

This evening the Yamaha teams will be back on track for the night practice sessions. As today’s results see Yamaha Factory Racing Team within the top ten, they will be back on track tomorrow to take part in the tomorrow’s 8H Top10 Trial which will decide the first ten positions on the grid.

Bradley Smith - Yamaha Factory Racing Team Rider:
“It was unfortunate I crashed this morning. I was playing around with the braking mark and lost the front of the bike. It’s good to have made that mistake, because it shows how easy those kinds of things can happen in the race. We worked on doing a race run first because it was around the same time of Sunday’s race, so it gave everybody an idea of what to expect. In the afternoon I wanted to push, and I was happy with my lap time, which is very close to Nakasuga and Pol’s. I didn’t want to take too many risks and was still third quickest, which is not bad. I was happy, because these were the first fast laps that I’ve done here, because before I’ve just been focusing on race pace. To have three riders within half a second is great, we are definitely the strongest team at the moment.”