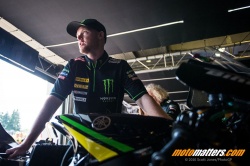 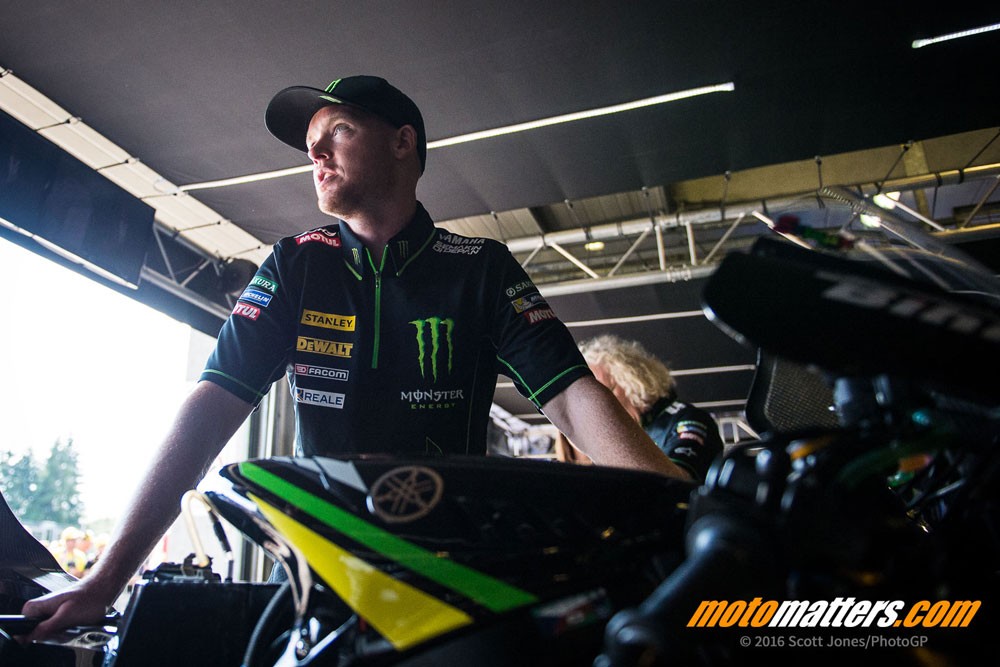 Electronics in MotoGP are an emotive subject. They are blamed for driving costs ever higher, and for taking ever more control out of the hands of the riders. It was these factors that drove Dorna to push for the introduction of spec electronics, first through the introduction of a single ECU provided by Magneti Marelli, then the adoption of a single software platform used to control that ECU.

The rise in the use of electronics and the introduction of spec software have led to some confusion among race fans. Just what the software is capable of, and how much control the riders have over the software, is unclear to MotoGP fans, and to a large section of the media.

So to help clear that up, we had the opportunity at Brno to spend twenty minutes with Monster Tech 3 Yamaha rider Bradley Smith, who walked us through the electronics systems and their use. Smith is one of the more intelligent riders on the grid, and is able to explain complex subjects in clear and simple terms. In the first of a two-part interview with the 25-year-old Englishman, Smith tells us all about the electronics on his Yamaha M1, what they do, and how he sets them up.

Q: Bradley, talk us through the switchgear on your Yamaha M1?

Bradley Smith:
"Let's start on the left hand side. On the top of the left hand side is our launch control. Obviously we only ever use that at the start of races. Red flashing lights come up on the screen there, and basically that's when launch control is on. Launch control automatically switches itself off the first time you roll off the throttle. So it will remain on all the way down the straight until you roll off the throttle, then it's no longer in use. Won't be used again. Doesn't have any time or RPM restrictions.

Basically, it limits RPM. You set the RPM level based on the torque number you want for the amount of power you want to move forward. You then map it in first and second gear. You can do it in third gear, but it's usually irrelevant by that point. Yeah, first gear, you either allow more RPM or less RPM, and then second gear is a case of more butterfly [valve controlling the air intake through the throttle bodies, equivalent to more throttle – MM], more torque or less torque. For example in Austria, at six hundred meters of altitude, we could allow more power, because there's less oxygen. Somewhere like Malaysia, where the heat's there, less power. But then somewhere like Qatar, you need to close the power down, or else you just add too much wheelie." 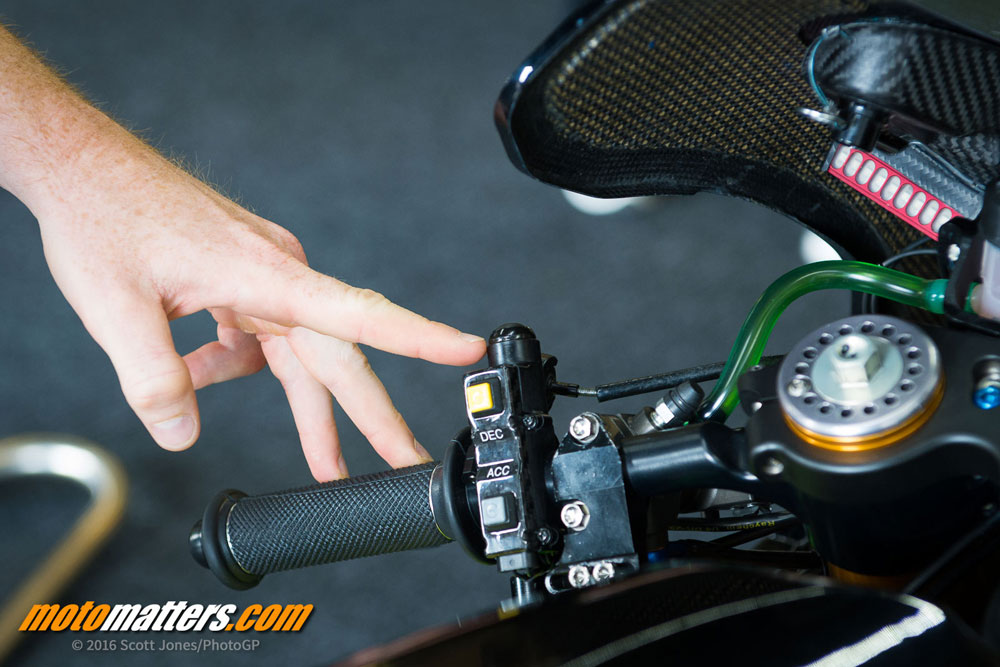 Q: Are there any really long runs to first corners where launch control is an issue?

Bradley Smith:
"No, because you just short shift. So you'll get to second, and if you feel you need more power, you just click to third. So, like at Mugello, when you start, you go from first to second, and then I just clicked to third really early this year, and that's when I passed everybody. Because everyone held it in second, whereas I just went to third, and the butterflies were at 100% power, so I just took off."

Q: So it can be a way of getting past people at the start sometimes?

Bradley Smith:
"Normally, at most places we don't get out of second, so you're still in that wheelie phase. So it's more a case of throttle control, body control, and rear brake."

Q: How much different is that to last year?

Bradley Smith:
"A little bit. Basically, last year we could start full throttle, wide open and have no worries. Whereas this year, we can't find the right balance. So we have a set throttle position that we can hold, and then we start from there. Otherwise we get a lot of wheelspin. So it's less sophisticated, in a nutshell."

Q: How much are you doing with the clutch yourself?

Bradley Smith:
"A lot! You're managing it a lot. That's why we see so many different starts between everybody, because if it was so automatic, everyone would get the same start. But if you hit that sweet spot, you definitely go well. We're managing power input and wheelie, more than anything, all the way. And then once you release it, you're in second gear. So anything from zero to 100mph is controlled by you and by the clutch, potentially."

Q: Has the feel of the clutch changed along with the different seamless gearboxes? Was there a difference between conventional, seamless up only, and fully seamless?

Bradley Smith:
"No. Just when you click to second gear and click to third gear, there's less cut from the engine. So basically, you go forward quicker when you go to second and third, because instead of getting the wheelie, it continues to go, it just hovers."

Q: Which engine map do you start with on your first lap?

Bradley Smith:
"This is where we have weighed up the options depending on how the track conditions are and what the tire life is. Usually, we won't go with the qualifying option, usually we will already go with one step stronger TCS [traction control - DE], just to try to look after the tire and try not to destroy it in the first few laps. So that's where this comes on board. The ACC and DEC buttons, ACC we have three maps, DEC we have three maps. And you'll be able to see those on the display there, it says ACC and DEC and 1,2, and 3. Acceleration and deceleration. 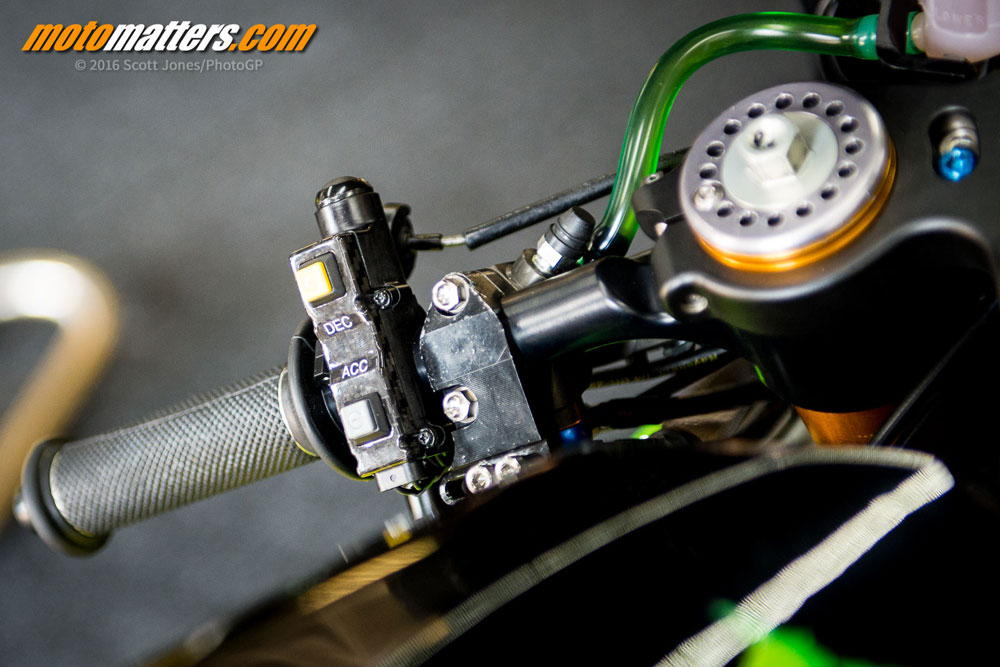 Based on this, we can change anything from power to TCS. So if you think you need less power to not get wheelspin, or you need the power, like in Austria, to be able to drive once the spin stops. You basically have two options: either you think it's going to spin so much when the tire goes off that you can allow less power, or you know that it's only going to spin when you are on the side of the tire, like in Austria. So when you pick it up, you need the power there, so you keep the same power but add TCS. So it doesn't spin too badly, but then it goes forward."

Q: But you don't select that, you only select between predefined maps, and your job is to figure out when is the best time to switch between maps?

At certain races, we never get there, at other races, I wish there was a switch 4, because you're going through them left right and center. Even in Austria, probably only for the final five laps, but I ended up in switch 3 on both ACC and DEC. Because as the tire drops, usually we only get one drop. But sometimes there's one drop, and then another drop. And there's sometimes when switch 1 is no good, the track has already changed so much from Moto2 and the heat, that you're already on switch 2 before you start. You've actually called it on the out lap and gone, man, I need to be on switch 2. So then you've only got a switch 3 to go to. So that's a negative.

Q: Do you switch acceleration and deceleration maps at the same time?

But it also depends where it drops, because sometimes at some racetracks, you get no drop in engine braking. There's no problem going into a corner, it remains consistent the whole race, and there's no reason to go there. But then there's other tracks where that goes first. Again, like in Austria, they kind of went hand-in-hand. I would say I went to deceleration before I went to acceleration, because going into the corner it was locking more, because of high braking from sixth down to first, you get a lot of back torque and that probably went the biggest, and then afterwards I went to acceleration. But it all depends on the racetrack. Sometimes it goes hand in hand, and sometimes it's completely different." 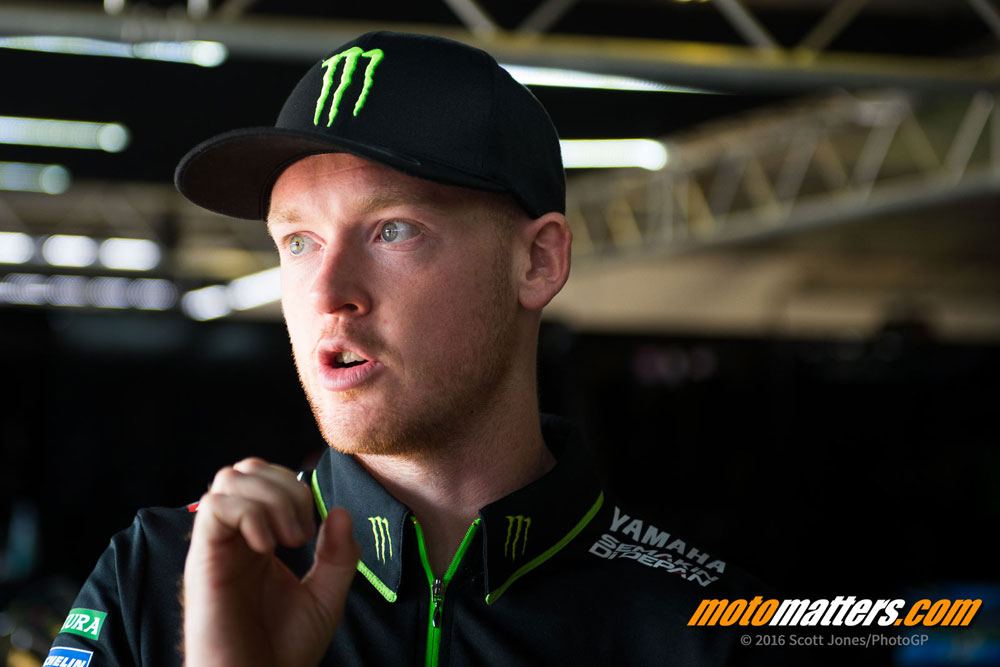 Q: Do you have a strategy for which lap you will switch maps, or is it feel?

Bradley Smith:
"It's by feel. There are certain racetracks, like in Phillip Island, where you go, listen, just give me full power at the beginning because at least I can go. And then I'm not going to get drafted. Because sometimes there's that much grip at Phillip Island, if you went with the safety switch, you'd just get hammered in the first five laps, and then you lose three or four positions.

So sometimes it's also strategy to say, we go full power even if we lose a little bit of tire during that period. It will actually be better, because I stay four guys in front, rather than getting passed by them. You're in front, and you're managing the guys behind, rather than being behind and trying to go forward. I always prefer to be the guy in front, keeping the other guys behind, than having to pass. For me, it's easier to defend than attack in motorcycle racing. Attacking means you have to go over the limit, where defending means you can manage it quite well. If you do it smartly."

Q: Is that a question of instinct, that you prefer to defend rather than attack? It seems Márquez is the opposite? Márquez prefers to attack, whereas Lorenzo prefers to defend?

Bradley Smith:
"I think it depends what bike you're on. The Yamaha doesn't attack very well against other manufacturers, like Honda, like Ducati. When I was behind Scott [Redding] I soon realized that as well. It's so difficult to make a pass, because the places where you are close, they're actually balking you, you can't actually get any advantage. You almost lose your strength.

Whereas the Honda, it seems to be you can just throw it there, throw it there, and still make the corner. You can send attacks left, right, and center. Whereas with the Yamaha, it's like, if I need to, I'm right at the limit. So I'd much rather be in front, then let go of the brake and flick into the corner and hopefully pinch off the guy, rather than thinking, I'm going to have to outbrake someone like Marc. So it's more down to the motorcycle than the rider character." 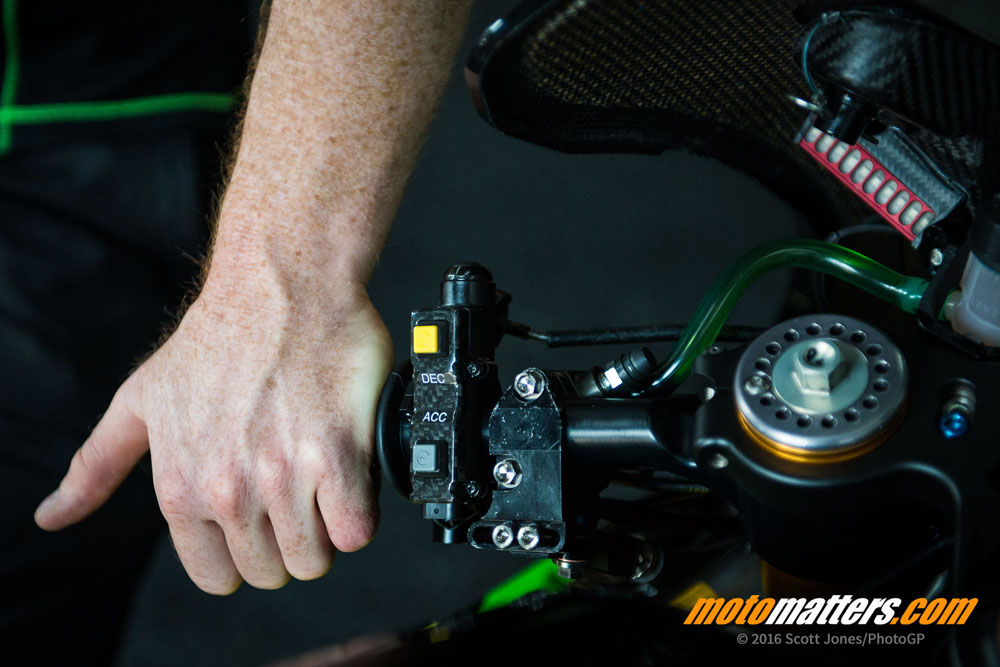