Brno GP 2011, from a Fans Perspective 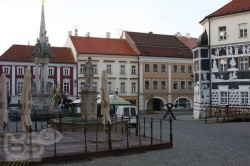 As the self proclaimed “Biggest Fan” of Bradley Smith I could not help myself, and at the last minute decided to once again journey to the Czech Republic to watch Bradders in action. Before the Summer Break, Brad had been “On Fire” with a brace of terrific results, I hoped that he could maintain this fantastic form and “Do the Business” at Brno.

As always on my visits to the GP's I go with my soul buddy Wes! On this occasion, Wes wanted to bring along his girlfriend Laura and so I set out the budget and began to organise the flights, car rental and accommodation. I had left it a bit late in the day to find a reasonably priced hotel in Brno but was fortunate to come across the town of Mikulov and here I discovered a quiet, charming, picturesque place to stay. If I return to watch the races at Brno again it is here that I will park my bum.

We arrived at the circuit on friday lunchtime. Brad had been out already in the morning but was due to ride his Mistral 610 again later that day. I made contact with Allan (Brad’s Dad) who was not overjoyed at the way the bike was handling, but when I spoke to Bradley later, he was upbeat about the handling issues. I was able to take some nice action pictures later that day from a quiet place trackside and as I watched, Brad seemed to be riding well. Friday is all about setup and he was working flat out to improve the bike. The weather was unpredictable for the qualifying sessions and it is important to second guess would it rain or not whilst you were out on track.

Whilst I was meandering at the circuit a very desirable young lady approached and offered me free admission tickets to a party that was being held in the Pramac Ducati hospitality area on the friday night. Well!!!!! I don’t have much money, so it must have been my rugged good looks that drew her towards me. Of course I accepted her generous offer of an entertaining night out.

When we arrived at the party, guess who beat me to it??????Brad!!!!! he was sat around a poker table with RDP and Mr Mamola,  This was a promo night for Bwin Poker Company, those racer boys were here just for fun, but I witnessed some heavy betting going on at another table. I very kindly accepted the free drinks that were being handed out but declined to have a go at poker.

Saturday arrived and so did the rain, it bucketed it down in the morning, this threw the teams into disarray for setup! Brad told me that they tried several combinations of wet and dry parameters but were still off race pace. Early on in the qualifying session Brad was up at the sharp end, but come the end of the period was way down the order.

Sunday = Race day, warm up came and I saw that Bradley was flying. I had goose bumps; this must be an omen.....had he been “sand bagging” all weekend?

The 125 race was an entertaining affair with once again Johan Zarco finishing second. OK! This is what we had come for, time for Brad’s race. I positioned myself at the exit of turn 2, this does not have access to a big screen or decent commentary, but lends itself to good viewing.

I heard the howl of engines and knew that the “flag had dropped”. The crescendo was building and I knew that any moment the pack would burst into view. I was searching for the cross of St George helmet that is Brad’s trademark. WOW! I was excited to see that Brad had made a cracking start and was up in around 6th spot. As quickly as they arrived, so they went, and I was left to bite on fingernails until they next appeared. It is difficult to comprehend whilst sat at home watching on TV, but men and machines are just a blur up at close quarters. I had no idea who was leading; my sole intention was to spot Brad and count down the previous riders to see where he was in the race.

A cloud of dust and noise, flashes of colour, screams from my lips, Oh No! That’s Bradley on the grass! As he desperately fought a tankslapper, riders were rushing past him. I saw through tears in my eyes that he had rejoined but was now down mid pack. Cluzel was on a heap on the floor and he managed to remount (don’t think that he completed the race) “GO ON BRAD” I shouted after the diminishing racers. It was fingernail biting time again.

The next time the pack came round I glimpsed a Tech3 bike, whew! At least Brad is still Sunny side up. They came round again and I realised I had made an error, the bike that I thought was Brad, was in fact Mike Di Meglio. Where was Bradders???? My phone was ringing, it was Wes, he was watching from a hospitality area and had access to a TV, he had seen Kallio and Brad come together and was calling to let me know that Brad was out!. I sat down and leant on the fence deflated.

By the time the race was nearing its conclusion I had pulled myself together sufficiently to get to the paddock area to find out first hand what had happened. I spoke with Allan, he too was full of disappointment. This race was a cracker, with the lead changing hands many times; I know that had Brad survived the first lap melee, then he surely would have been amongst these riders.

There was a Moto GP race later that day!

I spoke with Brad later in the afternoon, as always he was full of life and was not like me, (full of what if’s) He said something to me at that time which was very moving, I will never forget his words. I cannot print them here for they are personal, but thank you Bradders.

Wes, Laura and I had a terrific last night in Mikulov, we were laughing all through the night, I think the Red wine helped!

Monday morning, time to pack and head back to Blighty. We stopped off in Prague for a short while for our flight was not until early evening.

Now back in the UK. Cold and wet. Will watch Brad on TV for the rest of the season. As always Go Brad!!!