A fan report from Dave Booth 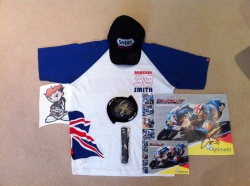 Thursday 12th August was the date that we had organised to travel to the Czech GP in Brno. We were departing from Manchester on our journey onto Prague. Throughout the day the heavens opened and monsoon style rains poured down onto the Manchester area. I had organised a cab to collect Wes and myself from our home in Cheadle Hulme and I had allowed plenty of time to drive back to my house to rendezvous with him. As the day wore on the area around our village became increasingly flooded and I became aware that all roads into the village were under water. As I endeavoured to reach home, I had to take many detours and "short cuts" to progress onwards.

Eventually the roads became gridlocked and I had to abandon my vehicle and continue on foot. A train track circles most of the village and the roads dip under the track, at each of these "dips" the water was 2/3 feet deep and cars that had attempted to traverse the floods had stalled and come to a halt half submerged in dirty Brown water. These abandoned vehicles were what had caused the gridlock. I rolled up my trousers and waded into the turbulent waters. Shoes, socks and jeans were wet through, I was now running the last mile, Wes had let me know that our cab had arrived ages ago and was itching to leave. Seb Coe esk, I sprinted towards home, I burst in and stripped off in the hall way, I looked for all the world like "Ghandi" dressed in just a pair of wet undies. I threw some fresh clothes on and we jumped in the cab and I told the driver to "spin em"

Our driver was brilliant, we were in a minibus and he ploughed on through the flooded streets. The 15min journey to the airport took us over ¾ of an hour and we were fast approaching our departure time. Out of the cab and we were on foot charging through the terminal like we were first through the doors at Harrods sale. Well! We made it, just!!!!!

Later that evening I learnt that we had made the national news with our disaster, trouble was, it was reported that the area was Bramhall and not Cheadle Hulme.

It was 10.30pm on arrival at Prague airport. We collected our car, set the satnav for Brno and pressed the loud pedal. But in our case it was the soft pedal. I had reserved a small rental car for just Wes and myself ,and small it was! It must have been no bigger than 1,000 cc, the motor certainly had no "grunt" it was more like a whisper.

We had been to the Brno circuit on many occasions and had previously stayed out of the town in a quiet/old hotel, when we arrived at our destination we were pleasantly surprised to find that it had been revamped and was now a 4star establishment. Although it was 2am I was wide awake and went along to the bar for some light refreshment, I slaked my thirst on Czechs finest, had a nibble then crashed into bed. We were woken during our slumber on many occasions by the forked lightening and peels of thunder clap, the torrential rains that we had left behind in the UK had followed us to Brno.

Friday appeared through a heavy, hazy, damp dawn, we showered, ate breakfast and headed for the track. We were eager to hear and smell the wonderful " 125 stink wheels" I made contact with my host for the weekend; we had a brief chat which was interrupted by his mobile going off constantly. We arranged to meet up again after lunch for a more detailed discussion.

Wes and I had come to Brno to watch Bradley Smith, for we monitor his track actions avidly and I might just be correct if I was to proclaim that we are his biggest fans.

Brad was out on track setting up his bike in preparation for Saturdays qualifiying session, he looked at ease and was in good spirits and was full of optimism for the forth coming race.

For Friday I had pre planned to meet up with friends at the hotel Santon for dinner. The hotel restaurant has a balcony which overlooks Lake Brno and on a sunny day you can watch the sun go down over the mountain backdrop of the lake. This is a wonderful vista and I could imagine it would be very romantic to serenade your young lady here over a nice bottle of wine and a hearty meal. However I was amongst men, so all thoughts of love were put on the back burner.

On arrival at the hotel my cab driver charged me 1,200.czk, without a second thought I paid up and made my way into the restaurant. I tried to work out what 1,200.czk was worth in sterling, bloody hell!!, that cannot be right? That's about 50 quid!!!!!! I have been robbed ( ha, ha, ha, another gullable tourist) I bet that driver was rubbing his hands in glee!

A table was set out on the balcony for us and a great meal and convivial conversations ensued, at the far end of the terrace a DJ had set up and was playing subtle tunes, plenty of diners got up to Boogie, but not for us, thank you! Us old Giffers were quite content to watch. And so ended our second night in Brno.

Once again during the night Donner und Blitzen was the calling of the Gods and we had a fitful nights kip.

Got to the circuit on Saturday, saw Brad on track in the morning session, and were full of optimism for the final qualifying runs just after lunch.........The boy done good!!!!!!!! Pole position and a new watch for his dad. What a difference that result made to my well being. I am usually full of life, but I was hyper for the rest of the day.

I had made arrangements to meet up in the centre of Brno on Saturday night to dine with another Brit who I met through GP visits, His name is Linden, he lives in the Birmingham area and had journeyed alone to watch the racing. Again we ate "al Fresco". What a difference eating out doors makes to a meal!

We all indulged in mouth watering desserts to round off a fantastic day.

The morning was wet again and everyone was apprehensive for the outcome of the weather. Just as the 125s were due to start the rains came and delayed the start. Upon commencement of the race it was declared to be a "WET RACE" All the riders swapped tyres for wet rubber and the flag dropped and away they went. You should know the results from the race, but if not, Brad finished off the podium. Not the best result I was hoping for, but at least it was another finish and more points "in the bag"

Wes and I had the good fortune to visit the LCR team unit during our time at the track and bumped into Steve Burges and his brother who were over on business. After the racing had finished several team members turned a hose pipe onto Lucio drenching him through, he wrestled the hose off the culprit and "got his own back" on all those that had set him up. He took it all light hearted and everything was laughed off. So, although Lucio can be very serious when he needs to, he can be a "big kid" when playtime starts.

We bade our farewells to everyone and fired up our motor and headed for the highway, we wern't looking for adventure right now but a good nights sleep in our own beds.

A great weekend was shared with Wes and we came away from Brno with a lot of cherished memories and a little bit wiser.